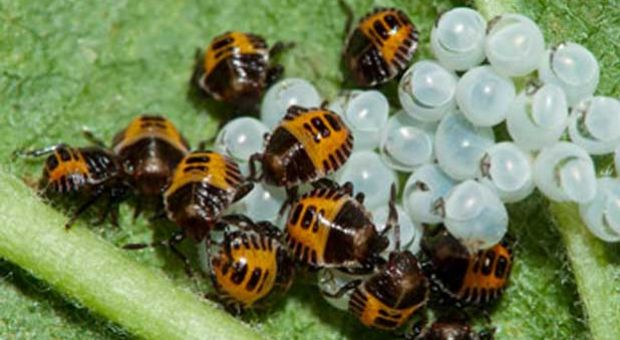 Brown marmorated stink bug (BMSB) nymphs, first instar, cluster around a mass of newly-hatched eggs on the underside of a leaf. Photo by W. Hershberger

Scientists are warning farmers and homeowners to gear up for battle with the invasive insect known as the brown marmorated stink bug. The number of adult bugs overwintering increased 60 percent in late 2012, and now they’re emerging to lay eggs. The shield-shaped, brown speckled insect probably arrived as a stowaway on a ship from Asia. First seen in Pennsylvania in the 1990s, it’s since been spotted in 40 states. Stink bugs get their name from the pungent smell emitted when they are frightened or crushed. For this month’s Environmental Outlook, entomologists reveal the secrets of stink bugs and talk about the search for sustainable methods of control.

Where Are The Stink Bugs, State-by-State?

Brown marmorated stink bug (BMSB) has been detected in 40 states, posing severe agricultural problems in six states and nuisance problems in thirteen others. Click to find state-specific resources, contact information and news, or to report a sighting of BMSB. How To Keep Stink Bugs Out Of Your House

Mike Raupp, the “bug guy” for the University of Maryland, shows the best ways to keep the infamous brown marmorated stink bug from invading your home.

How to identify BMSB, why this pest is important in agriculture and what’s at stake if they’re not stopped. Several insects look similar to BMSB, including the Spined soldier bug, Green stink bug and Boxelder bug. See photos of similar-looking bugs.