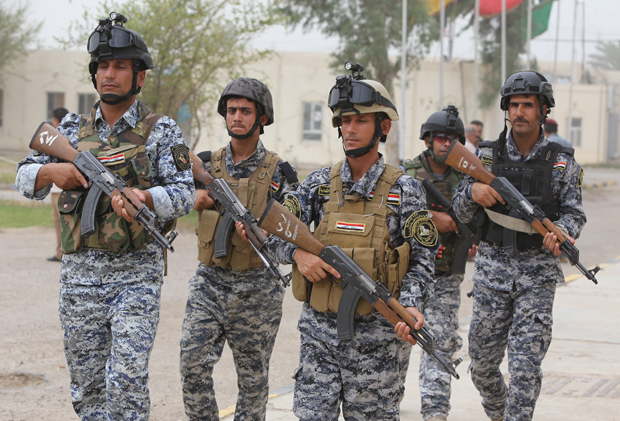 Iraqi policemen are seen inside a military base in the capital Baghdad, on June 11, 2014, after the parliament had received a joint request from Iraqi Prime Minister Nuri al-Maliki and the president's office to declare a state of emergency. Jihadists seized in the city of Mosul, Iraq's second and Nineveh province on June 10, in a major blow to the government apparently unable to halt the progress of armed. AHMAD AL-RUBAYE/AFP/Getty Images

Iraq scrambles to defend Baghdad as Sunni insurgents advance on the capital. While President Obama says the U.S. is looking for ways to help the Iraqi government, the White House rules out sending ground troops. Defense Secretary Chuck Hagel defends the deal to secure the release of Army Sergeant Bowe Bergdahl. A friendly-fire airstrike kills five U.S. servicemen in Afghanistan. The U.S. resumes drone attacks in Pakistan. A Nigerian Islamic militant group kidnaps more girls. And the start of the world cup is marred by protests in the streets of Brazil.A panel of journalists joins Diane for analysis of the week’s top international news stories.