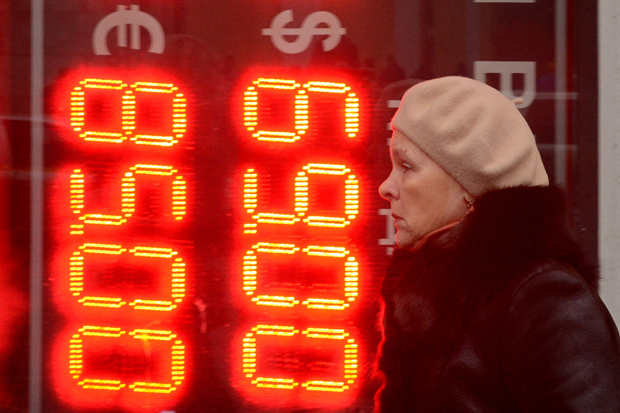 A woman walks past a board listing foreign currency rates against the Russian ruble outside an exchange office in central Moscow on December 16, 2014. The Russian ruble set a new all-time record low on Tuesday after bouncing back briefly despite an emergency move by Russia's central bank to raise interest rates to 17 percent. KIRILL KUDRYAVTSEV/AFP/Getty Images

Russia’s economy is in turmoil as authorities there take drastic steps to stabilize the ruble. To help prop it up, the central bank raised a key interest rate and the Russian government has begun selling off its foreign currency reserves. The economy is being battered by a combination of western sanctions and falling oil prices. The country faces fears of a bank run as consumers buy big-ticket items before prices rise. While some say this crisis will erode President Vladimir Putin’s political support, others believe he can weather the crisis. Diane and her guests discuss what’s next for Russia’s economy and its impact on global markets.