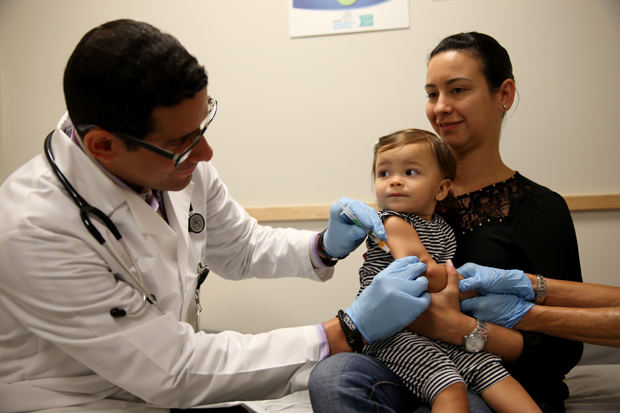 Daniela Chavarriaga holds her daughter, Emma Chavarriaga, as pediatrician Jose Rosa-Olivares administers a measles vaccination during a visit to the Miami Children's Hospital on June 02, 2014. The Centers for Disease Control and Prevention announced that in the United States they are seeing the most measles cases in 20 years.

Fifteen years ago, the U.S. was declared measles-free thanks to a vaccine developed in the 1960s. But last year, there were more than 600 new measles cases, the highest number in a quarter century. And a measles outbreak that began in Disneyland last month has now infected more than 80 people in seven states. Health officials say most of those who got sick were not vaccinated. Parents opting out of vaccines for their children say they are afraid of harmful side effects, especially autism. But most doctors continue to stress that the vaccines are completely safe. Diane and guests discuss a surge in measles cases, the anti-vaccine movement and implications for public health nationwide.