Sending Arms To Ukraine: Debate Over What The U.S. And NATO Should Do

Sending Arms To Ukraine: Debate Over What The U.S. And NATO Should Do 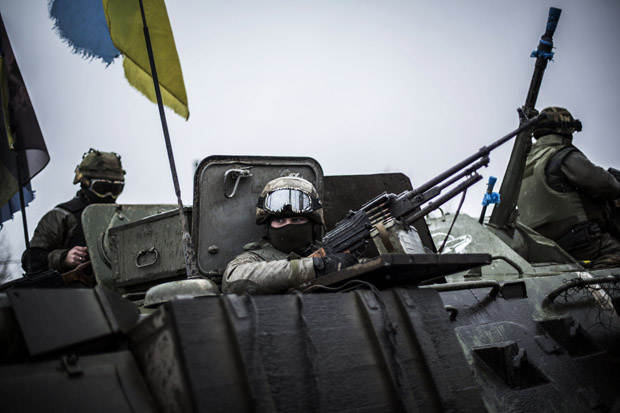 Ukrainian soldiers are seen in an armored vehicle topped with a Ukrainian flag near the city of Artemivsk, in the Donetsk region, before heading to the city of Debaltseve about 45 km away, on February 1, 2015. Civilians fleeing the besieged east Ukrainian town of Debaltseve came under withering artillery fire from pro-Russian separatists on February 1, with security forces vowing to fight to the end to defend the key transport hub. MANU BRABO/AFP/Getty Images

Fighting intensified in eastern Ukraine between pro-Russian rebels and Ukrainian forces after ceasefire talks broke down last weekend. Both sides say they will raise more troops, fueling fears of further escalation. Secretary of State John Kerry is scheduled to meet tomorrow in Kiev with Ukraine’s president. In the U.S., the Obama administration is weighing whether to supply Ukraine with missiles and small arms. A number of former U.S. officials are urging Washington to send defensive lethal aid. But others say the risks are too high – that it could cause Russia to expand the conflict and would anger America’s European allies. Join Diane for a discussion of U.S. options in Ukraine.