From The Archive: Diane Talks With Marion Barry (1990) 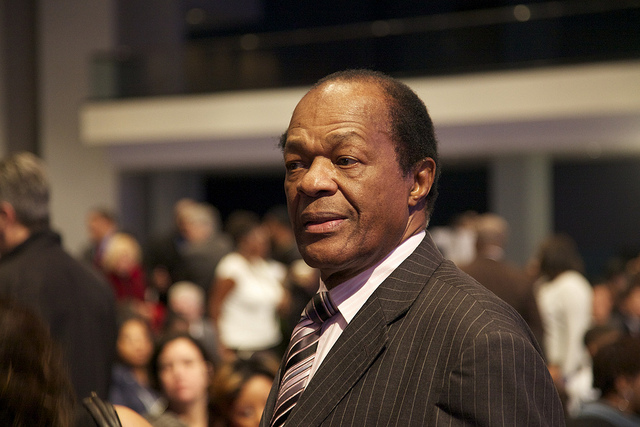 As the Kojo Nnamdi Show talked about the life and legacy of Marion Barry, we dug into our own archives for another listen of our 1990 interview with the late Mayor.

In January 1990, Barry was famously arrested in a sting operation for the use and possession of crack cocaine.  In June of that year, Barry had made the decision not to run again for mayor, running instead as an independent for the at-large council seat. He lost — it was the only electoral defeat of his career.

He was sentenced to six months in federal prison shortly before the election, though he didn’t begin to serve until October 1991.

Listen to the full interview — on his decisions in office, his life and his political future — below.

Diane: There were an awful lot of people who said they wished you’d concentrate on getting your personal life back into order, that recovering from substance abuse is something that cannot be necessarily accomplished in a very brief time but rather takes three or four years and these are years you could have used to strengthen your internal personal situation

Marion Barry: First of all, my sobriety is at the top of my list. That’s No. 1. Staying sober every day is the highest priority in Marion Barry’s life and my family and the government. Those who said it don’t know anything about recovery. Those who said it don’t understand that a recovering person can live a very meaningful and productive life, that the worst thing to happen to a recovering person would be for that person to be pushed aside some place and not really do things that are meaningful in their lives because part of what led me into this situation of addiction was low self-esteem, the feeling that I wasn’t accomplishing all I wanted to accomplish. A lot of resentment, a lot of pain, a lot of anger inside and now I know how to deal with that. And I disagree with those who said that. Those who know anything about recovery would say that you have to be focused on your own self and my sobriety is No. 1. I would never do anything that in my view would interfere with my sobriety. … Nobody would have to tell me, I would tell myself.

On his relationship with youth:

Diane: The past is the past but you talked about earlier feeling betrayed by Jesse Jackson. Many young people felt betrayed by you, Mr. Mayor, when you used substances to which you became addicted. How can you regain their confidence? I’m sure many have forgiven you, not all.

Marion Barry: Well I surely betrayed them. I’m going to them, individually or collectively, and asking for forgiveness. And I would say the majority have. You don’t get all of anything in life, but the majority of young people who have indicated anything about Marion Barry have said we were hurt, and they were hurt, and I regret that. But they now feel so good about me that they’re willing to ask me to speak to their schools. … I’ve been flooded with requests from young people not only in the District but in the suburbs.

On race relations in D.C. and America:

Diane: What is your assessment of the state between the races today?

Marion Barry: America is in trouble because the polarization is increasing in America, not just in Washington, but in America.

Diane: And there are people who say you contributed to that whole deterioration between the races here in Washington.

Marion Barry: I may have but I don’t think so. If you look at America, America is beginning to feel the tension. … In Washington, we’ve got to come together. I’ve fought all of my life for equal opportunity, I fought for integration, I fought for an understanding between blacks and whites and Jews and Protestants and Catholics, and I want to do all I can to say to white people and black people: “It’s time for us in Washington to lay aside whatever problem we have with each other and let’s work for the good of our city and for the good of each other.” That’s what I want to do.