What We’re Reading: Where Are The Anti-Semitic Acts In Europe? 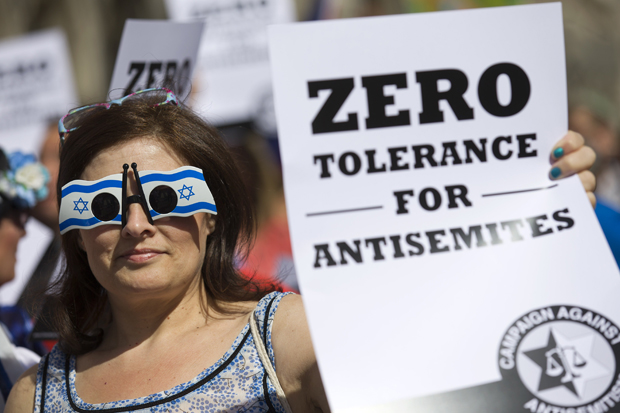 Jewish groups protest outside the Royal Courts of Justice in London on August 31, 2014, as they call for "Zero Tolerance for Anti-Semitism". Jewish groups demonstrated outside the British High Court as latest figures published by the Community Security Trust reported a spike in anti-semitic attacks on people and property in the UK following the latest outbreak of violence between Israel and Palestinians in Gaza. JUSTIN TALLIS/AFP/Getty Images

Ahead of Thursday’s show on anti-Semitism, some listeners wondered just how often acts of hate and violence were occurring across Europe.

The trend is hard to measure, a deep dive by The BBC said earlier this year.

Looking at previous conflicts, such as the Israeli offensive in Gaza in 2008-2009, anti-Semitic incidents do seem to rise in their wake, before falling again. But it could be that some of that rise is because in times of conflict people are also more aware of anti-Semitism, and more likely to report incidents which previously would have gone unreported.

And while there has been some good — in September, for instance, German Chancellor Angela Merkel led a rally against anti-Semitism in Berlin — there’s also been violence and fear.

“German authorities recorded 184 anti-Semitic incidents in June and July this year, up from 159 for the entire second quarter,” says The Wall Street Journal. And in just a few weeks in July, the Jewish Society in Denmark reported 29 physical, verbal and online attacks on Jews,  BBC reported.

The Netherlands has also seen a surge in anti-Semitic events, reports The Washington Post.

“The explosion of anti-Semitism in The Netherlands so far has mainly manifested itself in threats and hate on the internet. Physical hatred has also been seen on the streets. According to a source which deals with the safety of Jewish citizens cars in South Amsterdam have been vandalized with swastikas. Many Jewish families have removed their mezuzah – a roll of parchment which makes them identifiable as Jews – from their doorposts, in order to avoid becoming targets of violence.

For more: The New York Times has a more comprehensive timeline of anti-Semitism across continents.