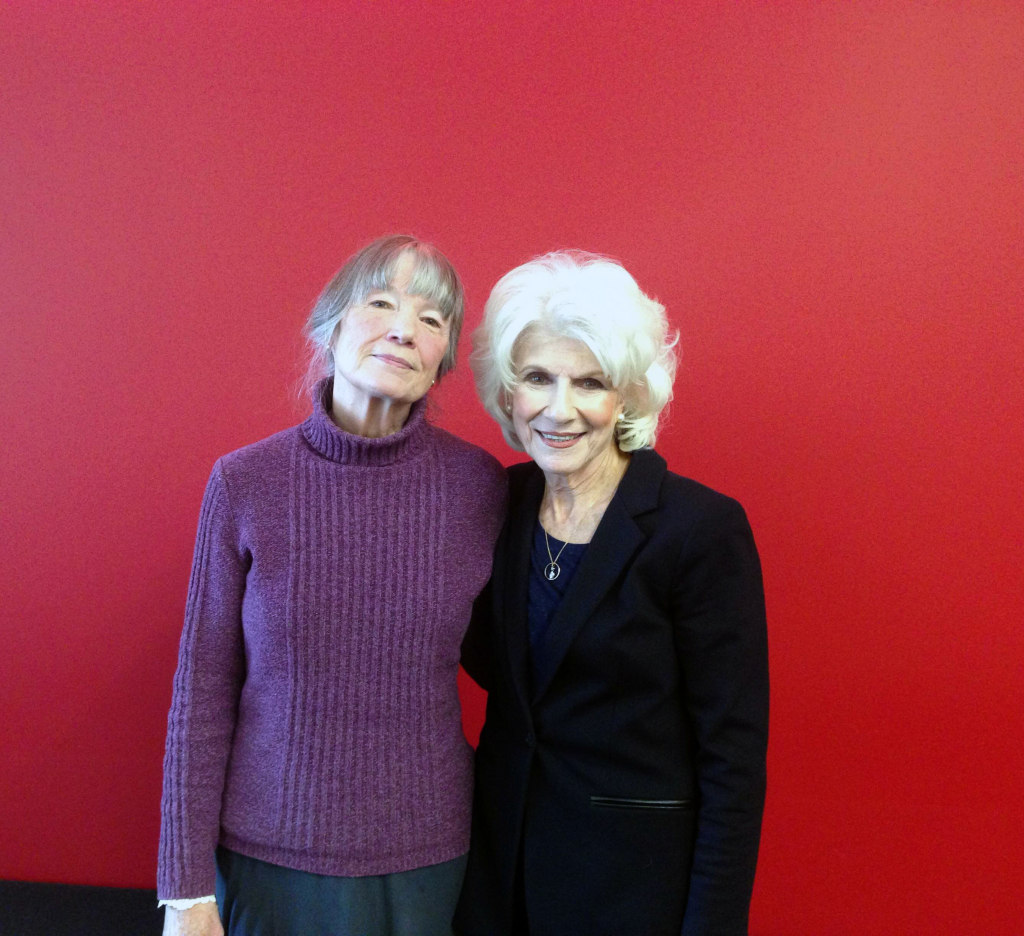 Anne Tyler poses with Diane after her Feb. 12 show.

After giving her first live radio interview, Anne Tyler sat down with us to answer some questions submitted by listeners ahead of the show.

Here’s what she told us:

Question: Like Flannery O’Connor and Alice Munro, you have such a talent capturing the voices of quirky personalities. How do you do this? Do you wander out in public places and eavesdrop on the ways people talk?

Anne Tyler: I do eavesdrop a great deal. And sort of make notes when I hear someone use a word interestingly or some little Baltimoreism or something like that. The other thing is that I think that it helps to read aloud to yourself what you write in dialog because sometimes what looks okay on paper just doesn’t sound right. So I think that helps make it sound more authentic.

Q: The city of Baltimore likes to pride itself on its quirky charm. John Waters reflects one aspect of that quirkiness in his work. Has Baltimore influenced your work?

AT: I think Baltimore has added immeasurably to my work. It does have a strong sense of self. The people in Baltimore are just so distinctly Baltimorian. It’s a gritty city and it certainly is a hard place sometimes – Nina Simone had it right – but it adds so much texture to a book.

Q: Which of your writings did you enjoy most and why? Likewise, which did you least enjoy and why?

AT: “Dinner at the Homesick Restaurant.” I think [it] came closest when it finally was finished to what I had thought I had wanted from it from the star. It was just one of those things that work out the way I wanted. It says things I think about family, you know, just in my heart of hearts. So I wanted to say it all and I feel I did say it all.

As far as what I don’t like, that’s easy: The first four books I wrote I wish I could just dissolve. I hate them. I think the reason is that at that point I was very young and I thought it didn’t even count as literature if it wasn’t spontaneous. Therefore I never rewrote. I just wrote like mad and sent it off, whereas now I rewrite endlessly.

Q: Have you any type of ritual when you finish writing a book?

AT: Well I know I’m done when I can say where the characters are going to be forever. I feel as though I fix them in their places. And actually, this is not very romantic, but as soon as I finish writing a book I clean all the drawers in my house that I neglected while I was writing. I just get very domestic.

Q: Please discuss your writing process. Do you make notes prior to an outline? Do you use a computer? Do you require silence or can there be any non-alarming noise in the background?

AT: I start with an outline that’s only a page long. It’s just the high points of the plot. But there are several pages of notes about the characters, so I really know a whole lot more about them than I’ll ever say in the actual novel. And it usually takes me about a month to map out a novel before I begin the actual writing. Then, once I’m writing, I use a particular pen – a Pilot P500 gel pen, which I own by the gross because I’m always afraid they will stop making them – in black ink. It has to be on unruled paper, no lines, and I write in a place where I can hear sounds from outside. If I can hear children playing or workmen talking, it seems to help me. I just like to hear language. I don’t have music or anything like that. Other than that, I really like silence within my writing … I always write at home, always in the same place.

Q: I’ve always wondered how an author chooses names for their characters. First names, surnames? How do you come up with the names? Is there ever any hidden significance?

AT: There’s no hidden meaning. A lot of names I pick up, I hear somebody calling someone and make a note of the name because it’s interesting. So I have a bunch of file cards with just little first names or last names. It’s funny: When I’m trying to think what a character’s name is, I always know what the first letter will be. And I don’t know why, but it’s so clear to me: “It’s got to be a name beginning with N,” and then I go down the list. I even have one of those baby name books.

[As far as Whitshank in “A Spool Of Blue Thread”]: I was just trying to find a name that wouldn’t be too ordinary and I thought it should also be sort of Anglo-Saxon. It was just sort of invented. I don’t know if it even exists.

Q: One scene that has always intrigued me is the airplane at the end of “Dinner at the Homesick Restaurant.” What were you imagining for the characters when you wrote that as the last scene?

AT: That book, unbeknownst to anyone but me, has some military thing or reference to war or fighting in every single chapter, and that’s just because I felt the family was at war so often. So that little brown plane is a military plane that’s just overhead.  And it also refers to something that I thought once when I was thinking about a family quarrel or something in my own family. I I was picturing is that right afterward – it all worked out – my father was out with my brothers and me and we were tossing a ball back and forth, and I just pictured that ball rising in the sky and falling back down, this little white ball. And it seemed like such a carefree, happy image after thinking about a family fight, so in a way that was reflected too in the little airplane.

Q: Based on my experience as an aspiring writer, “quiet” novels are difficult to sell even when the writing is considered strong and the characters and plot intriguing. Do you have any advice for authors of quiet novels? I would hate to imagine my bookshelves without your novels on it.

AT: No, I don’t have advice, but I really, really wish this person well because I love to read quiet novels myself.

Q: Are there other writers in your family? Do they seek your opinion?

AT: There are no writers. They’re all scientists oddly enough.

Q: What are your future writing plans?

AT: I don’t know yet because I always have this long sort of refilling process where I just try to drink in what the world is doing these days. And then I’ll sit down probably … I don’t know, maybe summer. It’s a good time to start a book in the summer.

Listen to our full interview with Anne Tyler here.