This week,protests erupted in Indiana after it passed its own version of the Religious Freedom Restoration Act.

But it’s just one of 20 states that have adopted their own versions of the federal law since 1993. 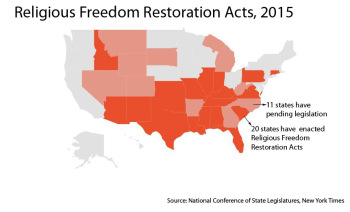 How did these laws start? The New York Times explains:

When people feel that a “state action,” like a fine or mandate, imposes a severe burden on their religious beliefs, they can go to court, where a judge must determine whether the action is warranted by a “compelling” governmental interest that is being achieved in the least burdensome manner possible.

The federal law pertained to a specific case, and as a result, was much more focused. Some of today’s laws, though, go “beyond the original intent, allowing people to act in the name of religion in ways that impinged on the rights of others.”

Arkansas and Indiana’s governors took different approaches to legislation in their state: Indiana Gov. Mike Pence signed the act, but after public backlash — including bans on travel to the state by several state and national politicians — pivoted, ordering a “fix” that looks like it will pass the state’s legislature.

But Arkansas Gov. Asa Hutchinson refused to sign the bill that landed on his desk, sending it back to legislatures to “get the right balance.”

Along with Arkansas, 10 other states have religious freedom legislation pending.

How will it play out? We took a look on our April 2 program: Listen here.