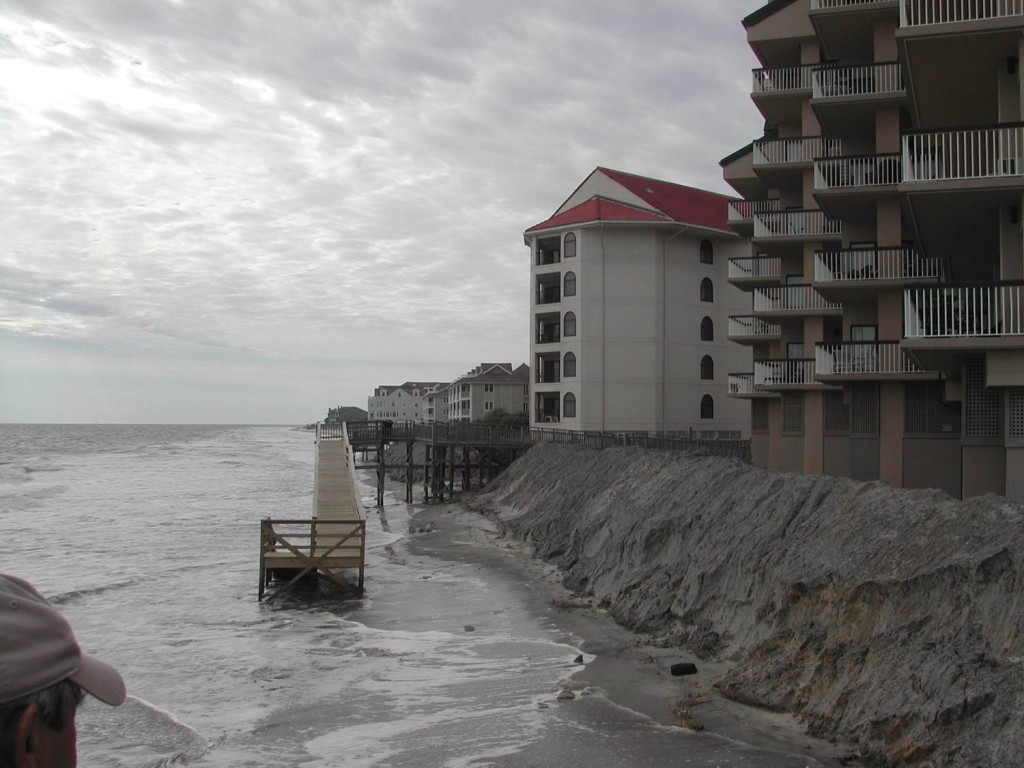 The Isle of Palms in South Carolina. Credit: Orrin Pilkey.

For decades, development has boomed along America’s coasts, and as storms have ravaged shorelines, communities have scrambled to restore them.

But rapid development and rehabilitation projects could be doing more harm than good.

In Miami, for instance, eroding shorelines are starting to swallow high rises that have nowhere to go. Towns are building seawalls to protect their communities, but as they grow higher, the ocean slips from view. Coastal engineering may hold shorelines still, but what beaches actually need is flexibility to change with the land and ocean. In many cases, that flexibility is gone, Orrin Pilkey writes in his book “The Last Beach.”

Experts have long warned that beaches are in danger. But now, that reality is starting to creep closer: In 30 years, many developed beaches will be swallowed at high tide; man-made beaches probably won’t last beyond another 60, Pilkey says.

On Aug. 5, we talked about some ways we can save America’s beaches. But some areas are still more at risk than others. Here are some of the country’s fastest-disappearing beaches — and what’s being done to save them. 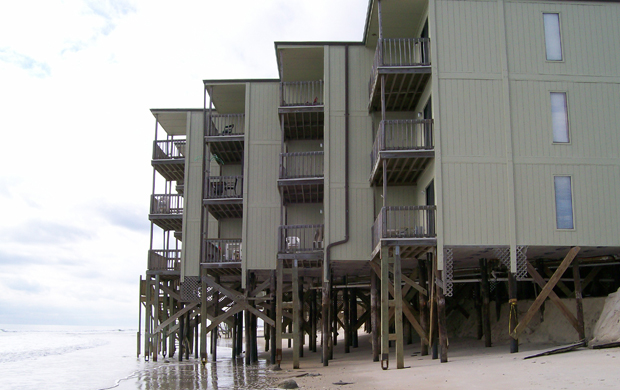 The 11.1 mile strip of beach between Wilmington and Jacksonville, North Carolina, has been replenished several times over the last few decades. But now, it’s largely gone.

The Town of Topsail started the fifth phase of its restoration project at the end of 2014. There are several more phases to come: To maintain the shoreline, the town will have to replace about 100,000 cubic yards of beach per year, but it can only afford to haul sand every five.

Houses in the town of just under 800 people are also in danger. In January, crews scrambled to build 9-foot sandbag walls to protect coastal homes from waves that, thanks to erosion, are washing foundations away. Without intervention, many of those homes will be gone by the end of the year, officials say. 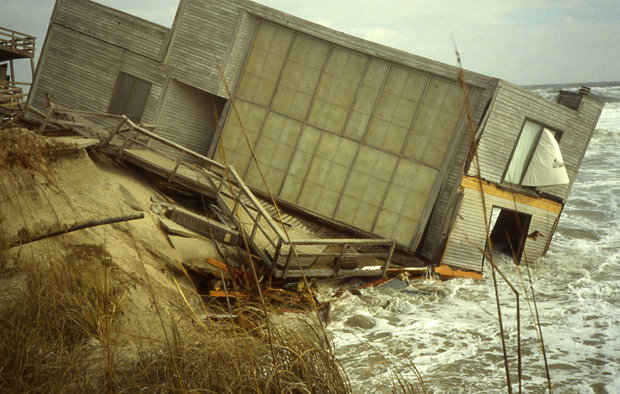 Nags Head is in the heart of North Carolina’s 300-mile strip of barrier island beaches. It’s also one of the most vulnerable.

In 2011, the beach completed a massive $36 million beach nourishment project, which took sand from a thick offshore sandbar to restore the beach. But a relatively small surface area was covered by the dredge, Pilkey says. The beach is still predicted to erode at a rate of 2 feet per year. The national seashore just to the south will lose 10 feet a year. 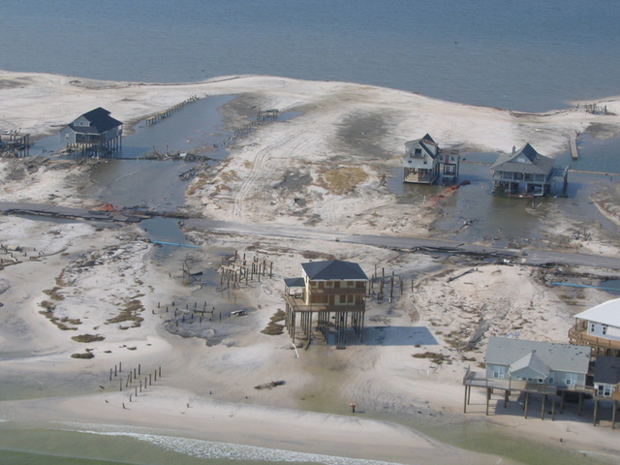 The “sunset capital of Alabama” is also “perhaps the most unsuitable barrier island in the U.S for development,” Pilkey says.

The 14-mile barrier island protects many of the state’s coastal communities. But it’s eroding at a rate of 5.5 acres a year.

Sand used to replenish itself naturally as sediment washed up from the Mobile Bay Ship Channel. But the dredging of that area, among other projects, has made the source of sand nearly non-existent.

Officials have earned a grant for a study that will look at the risks and benefits of a $58.6 million beach restoration project, which would dredge sand from the Gulf of Mexico to rebuild the 4.25 miles of the island’s western shore. But it could be another four years before it comes to fruition. 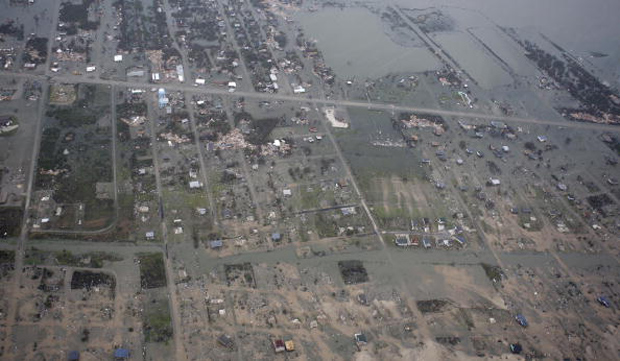 On average, the Texas coast is losing 2.3 feet a year to erosion. But Galveston’s shore is the most vulnerable.

In 1900, a hurricane wrecked the coast of the small barrier island, killing 6,000 people in one of the deadliest natural disasters in U.S. history. Afterward, the state built the Galveston Seawall, a 17-foot barrier that stretches along 10 miles of beach. But the protection it offers is fading: A new study says the area’s popular West End could be gone by 2035.

The state is taking action before then. This summer, it’s rebuilding a 100-foot-wide beach that erosion destroyed decades ago, The Houston Chronicle reports. They’re hoping this one will last. 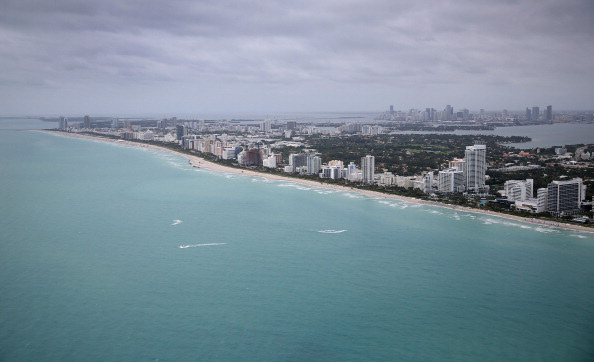 Dense development and a beach that’s in near-constant repair have prompted most scientists to say the popular stretch of South Florida’s coast will be gone in the next century.

Crews have long sourced sand for the beach from the adjacent continental shelf, but that source is nearly gone, Pilkey says. The question: Can Florida afford to keep up with the restoration necessary to protect its shores?

In Rolling Stone, Jeff Goodall says no. He paints a dystopian future where Miami is underwater by 2030.

The city, however, is more optimistic: It’s spending $300 million on a project it hopes will save some $27 billion in real estate. The irony, Pilkey says: Those high rises are what’s hurting the beach in the first place.

Want more? We look at the future of beaches in our Aug.5 Environmental Outlook. You can also read a preview of Orrin Pilkey’s “The Last Beach.”