From 1786 to 2016: The Evolution Of The Presidential Campaign Song 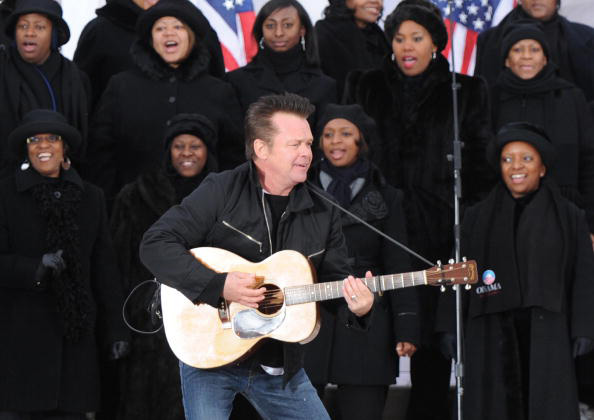 John Mellencamp performs at the 'We Are One" concert, one of the events of then-President-elect Barack Obama's 2009 inauguration celebrations, at the Lincoln Memorial in Washington, D.C. MARK RALSTON/AFP/Getty Images

Music and politics haven’t always mixed (in fact, protest songs were the pièce de résistance of the anti-government movement of the 1960s and ’70s).

But today, for the politically-minded among us, hearing “Signed, Sealed, Delivered, I’m Yours,” could bring to mind Stevie Wonder, or, Barack Obama on the stage during his 2009 inauguration; “Born Free” had its moment when Mitt Romney took a primary stage with Kid Rock.

Yet for better or worse, music as a way to connect with voters isn’t a new phenomenon. Presidential candidates have used theme songs since the 1800s, though in the beginning, they were more likely to rewrite the lyrics to “Yankee Doodle” than commandeer already popular songs by Ben Harper or U2.

Take a trip through campaigns past with this playlist of presidential campaign music. Don’t see your favorite on the list? Give it a shoutout here.

This is where it all began: George Washington’s supporters rewrote lyrics to several British Songs — including “God Save The King” — years before he actually took the White House.

Originally published as “Tip and Ty,” this song to the tune of “Little Pigs” was used by the William Henry Harrison and John Tyler in their 1840 campaign. Below, the song is reimagined by They Might Be Giants.

Abraham Lincoln used this in his 1860 campaign, taking an old Irish drinking song and using his own lyrics:

Hurrah for the choice of the nation!
Our chieftain so brave and so true;
We’ll go for the great Reformation–
For Lincoln and Liberty too!

Dwight D. Eisenhower took a different approach to his 1956 campaign: his own classic ad jingle. He had some big-time support: Irving Berlin wrote the lyrics, and Walt Disney made one of his cartoons.

Frank Sinatra agreed to sing a rewritten version of his song for John F. Kennedy’s 1960 campaign:

Ronald Reagan didn’t technically pick this Bruce Springsteen song for his 1984 run for the White House. But he quoted The Boss and said he was a fan. Springsteen, who has long avoided being associated with politicians, quickly complained. But it wouldn’t be the last time he’d have to fend off a candidate: He’s also had issues with Bob Dole and Pat Buchanan.

Even music fans who didn’t care for Bill Clinton could appreciate his first presidential action: He convinced the members of Fleetwood Mac to reunite for a performance at his 1992 inauguration.

Ross Perot’s decision to use this Patsy Cline hit for his 1992 campaign confused a lot of voters, particularly the lyrics “I knew you’d love me as long as you wanted/
And then someday you’d leave me for somebody new.”

He also famous danced with his daughter to the song on stage in the middle of a 1992 stump speech. Nobody was there to capture video, but here’s Cline with the original.

Republican hopeful Paul Ryan chose this song for his 2012 campaign. But his groove was short-lived: Twister Sister asked him to stop using the song — and worse, said they were planning to vote for opponent Barack Obama.

Donald Trump is not only leading the GOP primary field in the polls: He’s ahead of the curve on music, too. He’s already made this Neil Young hit his own, first using it in his presidential campaign announcement. Young wasn’t amused, though: He says Trump was never authorized to use the song. Trump says he is, but in recent weeks, has started to use “We’re Not Gonna Take It.” Meanwhile, Independent candidate Bernie Sanders apparently swooped in earlier this summer to use Young’s song instead. There’s not yet a winner in this battle.