Are Your Animals As Smart As You Think? 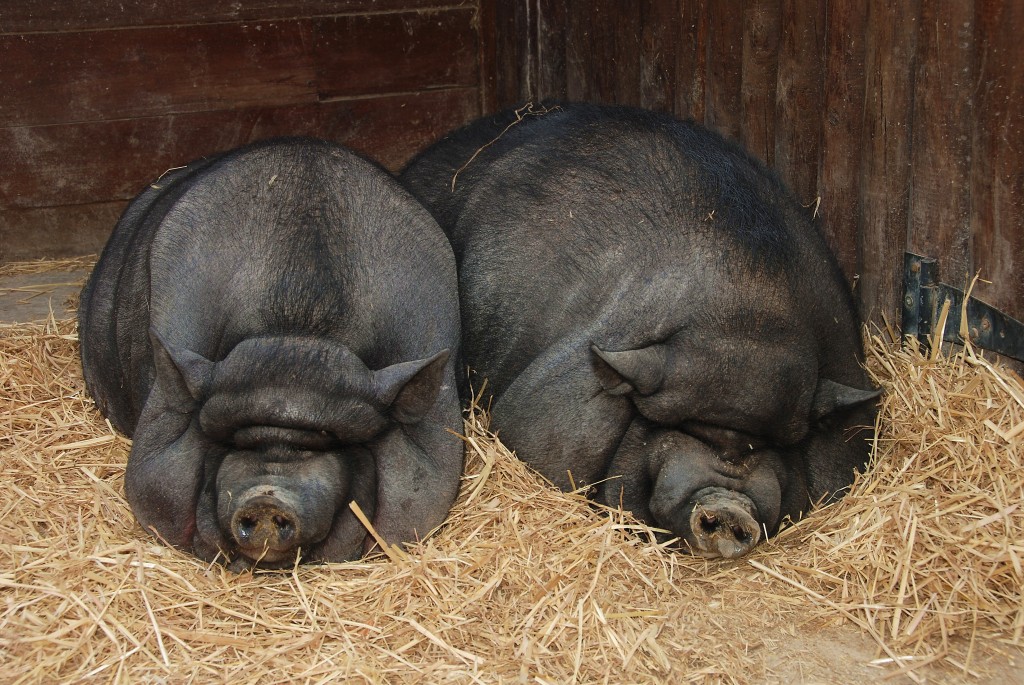 Can pot-bellied pigs recognize themselves in a mirror? One listener wanted to know. Alvesgaspar/Wikimedia Commons

“The only thing that separates us from the animals is our ability to accessorize,” one listener tweeted at us—quoting Steel Magnolias—during Tuesday’s show on animal intelligence.

Our guest, Frans de Waal, primatologist and author of “Are We Smart Enough To Know How Smart Animals Are?” might agree. In his book, he argues that we underestimate other animals’ cognitive abilities.

During the show, many more of you shared your animal experiences with us than we could fit on the air. After the show ended, we sent them to Dr. de Waal via email. We’re sharing his reactions, including whether they line up with the research he’s read.

Andrea, via Facebook comment: “I had a wonderful experience as a child with a crow named Bandit. We named her that because she’d steal things from us in a playful manner. I can remember her taking a piece of cold pizza out of my friends hand at the bus stop and dropping it on a neighbor’s roof. She’d open our mailbox for fun. She’d appear in front picture window looking into the house at times. I’d call her every morning and feed her. The local newspaper even came out to do an article on it.” 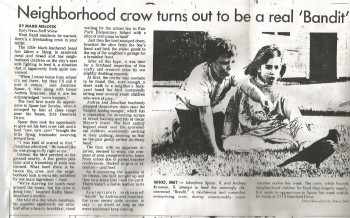 Dr. Franz de Waal: “Yes, crows can become pets if you raise them yourself. Often they don’t fully attach and remain somewhat wild, and if you let them, they will join the crowd of crows gathering in the fall ready to head south, and will travel away with them. This is what Lorenz described for his jackdaws, and what also happened with mine. They may still return next spring, though, just to say hello.”

Paula, via Facebook message: “From Seattle Slew‘s first trainer: In training horses for over 40 years, I can attest to their intelligence, which varies as much as in humans. Some — like Seattle Slew — came to me very mentally immature. His immaturity required more patience in early training to avoid psychologically over-stressing. Without allowing three times longer than average for his HUGELY INTELLIGENT mind to mature and be able to handle more pressure, his story could have been quite different.”

FdW: “I am sure animal trainers have a very different take on animal intelligence than most people, as they know that motivation, attention, character, endurance, persistence all play a role. It is not just behavior x gets rewarded and that’s it. I hope animal trainers will one day explore these other variables, which make every individual unique.”

Dean, via Disqus comment: “When I met my wife years ago she had an old, blind dog who had no trouble getting around as if he was sighted. We learned how he did this when it became apparent that he could not sense any kind of wire fence. He would run right into them. It was apparent to us that he was sensing sound echoes off of objects similarly to bats.”

FdW: “Very well possible, but the case would be stronger if you’d heard the dog make sounds. Or do you think it was just the echo of his walking? Some blind people have learned to echolocate by making noises such as stomping with a foot, snapping fingers, producing clicks. It helps them find their way.”

Paula, via Facebook comment: “I was hoping I’d hear something about the experiment someone ran where they taught monkeys to handle money. The monkeys learned to buy snacks from the experimenters, but nobody trained them to use their coins to pay for sex — they came up with that on their own.”

FdW: “This was a study on capuchin monkeys in a lab at Yale. But the money-for-sex phenomenon was not really convincing and the scientist who did the study may have been exaggerating. He claimed that ‘The capuchin has a small brain, and it’s pretty much focused on food and sex,’ which is a gross simplification. The capuchin monkeys is actually very smart, and an excellent tool user. This is always the problem with reports in the media: to separate the hype from hard data. Exchange of food for sex does occur in nature, however. Bonobo males may get sex from females in exchange for food, and of course food transfers by males are part of courtship in many birds. While selecting a mate, bird females may be testing the capacity of males to provide, which will be useful when the chicks arrive.”

Maxine, via email: “Over my nearly 25 yrs of owning indoor/outdoor potbelly pigs, can definitely share that they pass the ‘mirror’ test. I had the incredible opportunity to witness one of them during developing stage when he suddenly ‘discovered’ the large 5X6′ mirror in my dining room. He had walked by month after month & approx 8-9 mos old he suddenly stopped in front of mirror, noticing another pig! Hair went up, he started the clicking sounds pigs make when warning is given or they are going to fight. He started pacing around….. they usually get nose to tail & circle… this continued for some 20-40 seconds when he seemed to ‘realize’ that this was not some intruder, this was himself! He then got much closer, experimenting with his look, turning his head, partially turning his body, etc. It was truly a unique and breakthrough moment, and I was so privileged to have seen this occur, in real time, just a few feet away. These are some of the smartest and most shrewd beings I’ve ever encountered.”

FdW: “Your pig got used to the mirror, and stopped getting upset by it. This is also what we see in dogs and cats. Whether this is based on knowing *who* they see in the mirror is a separate issue that should be tested with the mark test. Do they know it is themself? I describe how this test is done in my book, but thus far the only animals who pass the mark test without any help (such as training) are: humans, apes (not monkeys), dolphins, elephants, and magpies.”

Julie, via email: “I have had several guinea pigs, one of the most common test animals. After the death of one of my pigs Betsy, her friend Francis was definitely affected. During this period, I would take Francis out to comfort her. If I was also upset, she would in turn, lick my tears away (was she trying to comfort me too or did she just like the salt?).”

FdW: “All animals with attachments react to the loss of one of them. It is natural that they miss the other, and yes, they sometimes go into a sort of depression. I doubt that a guinea pig knows what tears are, though, so your second hypothesis may be more likely.”