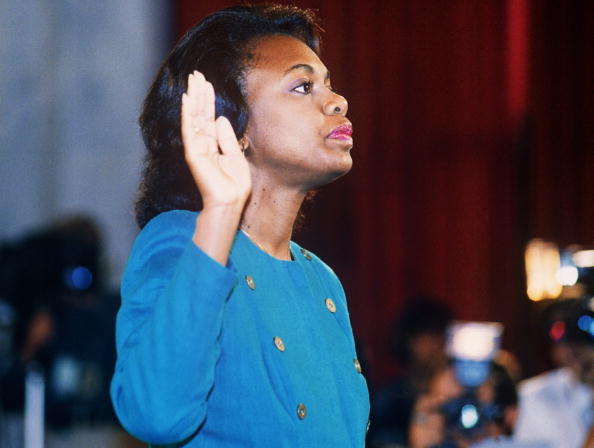 In 1991, when Emma Coleman Jordan helped represent Anita Hill in the Clarence Thomas Senate hearings, she thought she would be part of a “watershed moment” for sexual harassment in the workplace.

But 25 years later, she’s still having the same conversations.

In a recent episode of our show about recent allegations of inappropriate behavior by former Fox News chairman Roger Ailes, Jordan said the issue runs deeper than just this one case. A January 2016 study of women with at least 10 years of experience in Silicon Valley, for instance, showed that 60 percent of those surveyed had been the target of sexual harassment; 90 percent had witnessed sexist behavior “at the company, off sites, or in industry conferences.”

How does this happen? Jordan says companies generally rely on three legal tools to keep information about sexual harassment cases “under seal”—and out of the public domain.

Jordan says we can see all three of these legal tools at play in the Fox News case—particularly in this statement from Ailes’ attorney:

“Gretchen Carlson’s attorney has led a concerted smear campaign to prejudice the rights of Roger Ailes in this case. Her attempt to game the system so as to avoid the arbitration clause for her client’s baseless allegations is contrary to law and unsupported by the facts. Since July 6, 2016, the efforts of Ms. Carlson, her counsel, and her public relations team have spawned a myriad of stories about this case in the media, on-line and on television, including articles in The New York Times, The Wall Street Journal, The Washington Post, and The New York Daily News, among many others. In so doing, Ms. Carlson’s lead counsel has made statements going well beyond the ambit of what might be protected by the litigation privilege. Ms. Carlson and her attorneys even posed for pictures in a front-page story in The New York Times where they again blasted Mr. Ailes. There is no legitimate reason for Ms. Carlson’s strategy, particularly in light of the confidentiality provision in her Agreement. Rather, the goal of Ms. Carlson’s entire campaign is obvious: besmirch Mr. Ailes’s reputation so that he will pay her an exorbitant settlement.”

For more on the allegations at Fox News, and how companies can challenge cultures of sexual harassment, listen to our full show.