How The Presidential Election Will Impact The Future Of Obamacare 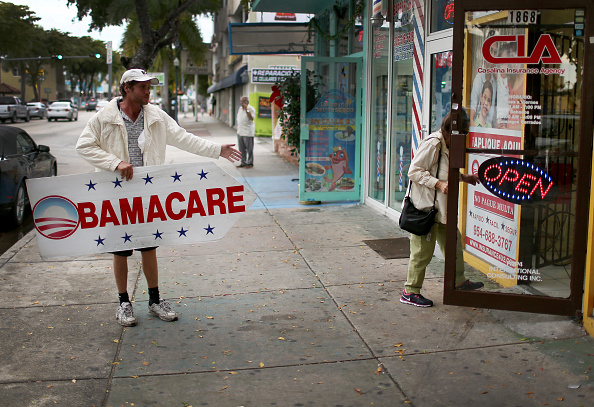 Pedro Rojas holds a sign directing people to an insurance company where they can sign up for the Affordable Care Act, also known as Obamacare, on February 5, 2015 in Miami, Florida. Joe Raedle/Getty Images

This week, Aetna became the latest major health insurer to back out of its exchanges under the Affordable Care Act.

The decision highlights the difficulties the government and health care companies continue to face as they struggle with enrollment, high premiums and costly claims.

“The ACA is not perfect,” wrote a listener named Sean during our recent show on Obamacare. “But the Obama Administration cannot refine it because Congress refuses to accept the law. How can we move forward?”

The system likely won’t see any changes until after the 2016 elections, after new political leadership is in office, American Enterprise Institute’s Joe Antos told us.

Ron Pollack, of Families USA, pointed to two different outcomes for the legislation, depending on whether Hillary Clinton or Donald Trump is elected president.

The ACA under a Donald Trump presidency

Some of the “key architecture” of the ACA will probably be repealed, Pollack said, including subsidies and Medicaid expansion — which will end that debate.

The ACA under a Hillary Clinton presidency

But Wall Street Journal healthcare reporter Stephanie Armour said this second prediction is “optimistic,” because it doesn’t include “what happens in Congress.” She added: “The idea that there will not be strong partisan bickering is … nice, but I don’t think that’s going to be the case.”

What about the public option for health coverage that Hillary Clinton has said she would support?

Armour said that Republicans on the Hill “are already bracing to oppose” it, and Kaiser Health correspondent Julie Rovner added that even “some Democrats” might also resist.

Either way, Antos told us, there’s an opportunity to resolve problems under new leadership — and the new president and Congress should take it.

For more on why Aetna pulled back from the ACA exchange, and who these changes are likely to affect, listen to our full show.