On Susan’s Mind: The Unexpected Earthquake That Is #MeToo 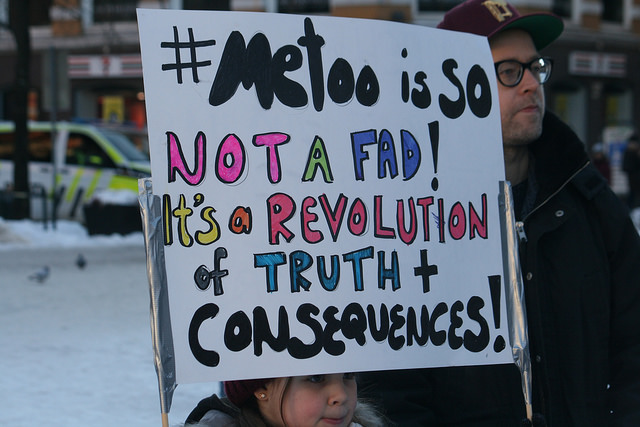 A young girl holds a sign at a protest in January 2018. GGAADD

Susan Page shares her thoughts on the pace of change being brought about by the #MeToo movement:

In covering national politics for the last several decades, I had never seen anything like the transformation in public views toward same-sex marriage. Two-thirds of Americans opposed gay unions in 2007. Just a decade later, two-thirds supported it.

Then came the #MeToo movement.

In the past five months, there’s been an earthquake in Hollywood, in the news media, in politics, in the corporate world over the issue of sexual harassment in the workplace. A billionaire businessman from Las Vegas, a U.S. senator from Minnesota, the most powerful movie producer in Hollywood, the most prominent voice on morning TV all have been forced from their jobs. Now the repercussions are shaking the White House amid questions about how seriously President Trump and his chief of staff took allegations of domestic violence against a top aide.

What’s changed on both the issues of sexual harassment in the workplace and sexual violence in the home is this: The number of Americans who believe the women now speaking up. That has empowered an army of women to come forward with stories of being demeaned, groped and worse by men in positions more powerful than theirs. In one survey, half of women who hold jobs outside the home said they personally had been harassed at work.

Donald Trump was elected in 2016 despite accusations of sexual misconduct by more than a dozen women and the release of an Access Hollywood tape in which he could be heard bragging about assaulting women. There was dismay by some that his accession to the White House meant a new and lower bar for acceptable behavior had been set.

Instead, it has helped fuel a movement that will have consequences that are still unfolding. It has prompted an unprecedented number of women to try to run for office. Ironically, the movement and its velocity might well not have happened if the first woman nominated by a major party for president had managed to win in 2016.

Count it as an unexpected part of President Trump’s legacy — a surprise to him, surely, and to just about everyone else.