On Diane’s Mind: The High School Students Of Parkland And Their Call For Gun Control 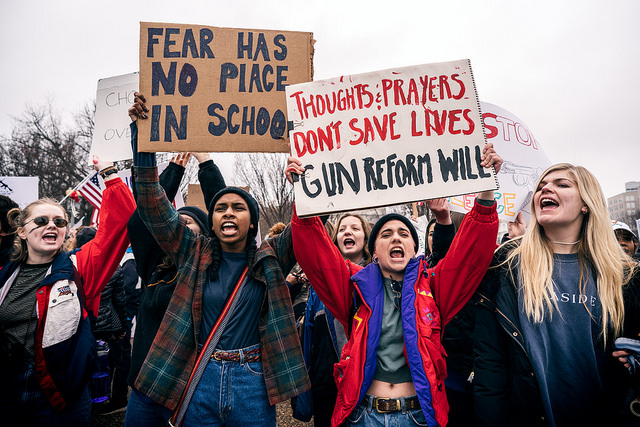 Protesters hold signs at a demonstration in Washington DC Monday. The event was organized by Teens For Gun Reform, an organization created by students in the Washington D.C. area in the wake of the shooting at Marjory Stoneman Douglas High School in Parkland, Fla. Lorie Shaull

Diane shares her thoughts on last week’s shooting, the high school students who are calling for action and what needs to be done to keep America’s school children safe:

I keep asking, as many of you do, when is enough enough? We’ve now witnessed yet another school shooting, this time a massacre in Florida, taking the lives of 17 people, both students and faculty members. The killer carried a semi-automatic weapon, an AR-15. With deadly accuracy, he mercilessly aimed his gun at anyone within range and pulled the trigger without stopping. He did what he had allegedly been planning to do for months. He killed 17 people. In his mind, the gun he carried represented his strength and his power to carry out his deadly aim … to kill people.

Immediately came statements from politicians regarding mental illness. Mental illness, they say, is what caused the rampage. People with mental illness are deranged. They do the unthinkable. It is they who should be blamed, not the guns they carry.

But my question is: why are semi-automatic guns available for purchase to the public at all?

They’re used by the military as weapons of war. But why are they placed in the hands of ordinary citizens? Hunters don’t need them. They’re not carried around as weapons of self-defense. In fact, they’ve now been used more than once to deliberately harm and kill human beings. But still, and again, we hear talk of mental illness with no mention of guns.

After the latest tragedy, we heard the same old phrases, and some new ones, from so many politicians: “our hearts go out to the families who’ve lost loved ones, but now is not the time to talk about gun control!” Indeed, the president flies down to his resort in Florida, visits the hospital where the wounded are being cared for, and compliments the doctors and the staff. He utters not one word on guns, instead tweeting disparaging remarks about the FBI and why he thinks they didn’t catch the killer before he acted. Not a single word about guns or the assault rifle the killer used. Now, under pressure, the president talks about banning bump stocks, a ban the NRA opposes.

Well, I think the young people of Florida’s Marjory Stoneman Douglas High School have seen enough devastation, and have different ideas that they are putting into action. Many of them are speaking out about guns, especially assault weapons, speaking out about the NRA and its hold on Congress, the money spent by the NRA to make sure members toe their line. And we know the fear the NRA engenders. Too many politicians believe that if they stand up with the young people who call for a ban on the sale of assault weapons, they may lose their seats in congress. So we must assume those politicians and their values lie more in maintaining a strong relationship with the NRA than maintaining the safety and lives of children and adults.

The time may finally have come when that relationship must be challenged, when our elected officials must find a way to stand up to, instead of lying down with, the NRA. The young people will lead the way, and this time, we can only hope, they will, with persistence and courage, lead us to a total ban on the sale of semi-automatic assault weapons.