Diane’s Commentary: President Trump And The Debate Over Gun Control 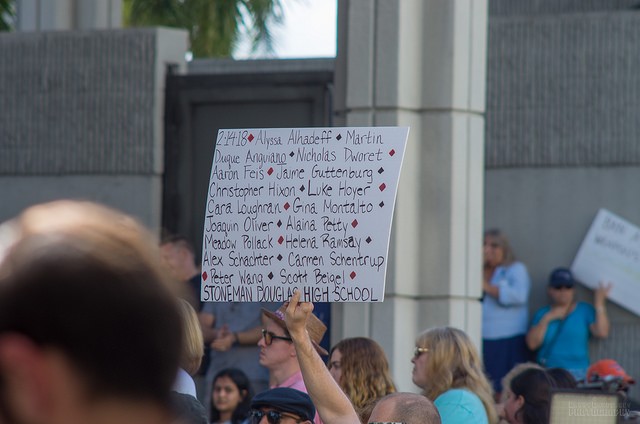 A sign at a rally in Ft. Lauderdale, Fla. lists the names of those killed in the shooting at Marjory Stoneman Douglas High School . Barry Stock

This week’s commentary by Diane:

Look, I know that I’m going to say now is what so many others are saying, but I’m so outraged I have to sound off or burst. So here goes.

Of all the unbelievable and even insulting reactions from politicians to the horror that occurred at Marjory Stoneman Douglas High School on Valentine’s Day was President Trump’s comment to a gathering of governors this week. He declared himself heroic, saying he knows he would have rushed into the school to confront the shooter, whether he had a weapon or not.

Really? As much as he imagines or would like to believe he would put himself into that kind of danger, I wonder whether, in the actual moment, he would step up. I raise the question because, in fact, the president avoided all military service during the Vietnam War. He received five deferments, one of which was medical, for what he has said was due to bone spurs in his heels.

The faculty members who placed the young people’s lives before their own were indeed heroic. They used their own bodies to shield those of students, and died doing it. Can we really believe this president would have done the same?

In reaction to the killings, the president wants to get rid of bump stocks, and put guns in the hands of teachers. But both teachers and students oppose bringing more guns into the schools.

The NRA continues its hold on politicians. But more than a dozen companies have distanced themselves from the most powerful lobby in the country. Dick’s Sporting Goods says it will no longer sell assault rifles, and has banned the sale of guns to people younger than 21.

Young people speaking out against guns around the country continue their crusade, demanding that lawmakers take more powerful steps to prevent another event like the one that took 17 lives at Marjory Stoneman Douglas High School.

In the meantime, this president has to hope his very high assessment of his own willingness to display the courage he believes he has is never put to the test.