Diane’s Commentary: Remembering “Mister Rogers’ Neighborhood” And The Man Who Made It 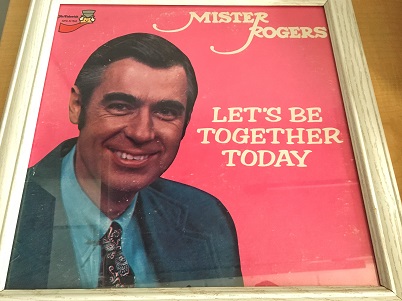 The picture of Fred Rogers that hangs on the wall in Diane Rehm's office. Her 2002 interview with Mr. Rogers is among her all-time favorites. Anthony Washington

This week’s commentary by Diane. You can listen to the audio version of the commentary at the end of this week’s podcast:

The other night I had the great fortune to watch a PBS documentary about one of my true heroes, Mr. Rogers.  It was hosted by actor Michael Keaton who, much to my surprise, had appeared on some of the early Mister Rogers’ Neighborhood programs.

There again was the glorious world of make believe, with Henrietta Pussycat, Lady Elaine and Daniel Tiger, all taking me back to my days of young motherhood, long before I began to work in radio.

Watching the documentary about the man who created that make-believe world made me yearn to hear, once again, the conversation I had with Fred Rogers many years ago, a conversation that occurred in November 2002, shortly before he died of stomach cancer in February 2003.

He was in his studio in Pittsburgh, playing his piano, while I was here in Washington.  I couldn’t see him, but in his voice, I could hear all the love and caring he gave to children and adults alike throughout his long career.  I believe it was one of the very last interviews he did. You can find that conversation here. I hope you enjoy it.