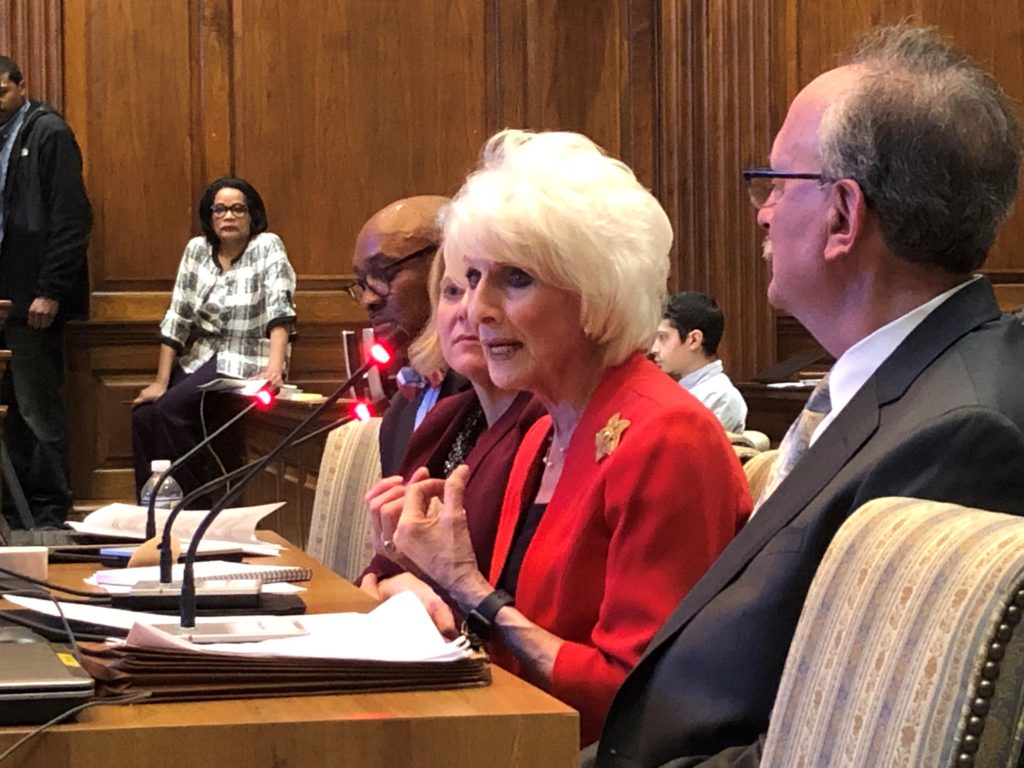 Diane Rehm testifies in the Maryland state house in support of a bill that would allow the terminally ill to end their lives with the help of a doctor.

“I sat by my husband’s side as he slowly died. Watching John in those last 10 days of his life made me angry. Why did our laws infringe upon an individual’s decision to peacefully die when dying was inevitable within a few months?” – Diane Rehm

Since the death of her late husband, John, Diane Rehm has become an advocate for the medical aid in dying movement. Today, she appeared in front of Maryland state lawmakers to tell her story and voice her support for a bill that would allow the terminally ill to end their lives with the help of a doctor.

The following is her written testimony.

I am grateful to have this opportunity to speak with you in support of the Maryland End-Life Option Act (Richard E. Israel and Roger “Pip” Moyer Option Act).

Most people I know hope they will die in their sleep, peacefully and without pain. Unfortunately, when my husband of 54 years, John Rehm, died, that was not his experience.

In June 2014, when John was 83, he was placed under hospice care. His doctor had concluded that he had six months or less to live. That’s when John told his physician that — because Parkinson’s disease had so affected him that he could no longer use his hands, arms, or legs; because he could no longer stand, walk, eat, bathe or in any way care for himself on his own — he was now ready to end what was becoming a prolonged dying process. He knew how Parkinson’s would take away the dignity of his life, and he knew the physical and mental suffering that was to come. He declared to me, his children, and his physician that he was “ready to die.”

But when his physician explained that he was unable to carry out John’s wishes in the state of Maryland, John became very angry. He said, “I feel betrayed.”

Then his doctor explained that the only alternative John had, if he wished to end his suffering, was to stop eating, drinking fluids and taking medications. He asked his physician how long the dying process would last and was told it could be 10 days to two weeks.

The very next day, my husband began his journey to the end. He ceased drinking fluids, taking medications or eating any food whatsoever.

I sat by my husband’s side as he slowly died. Watching John in those last 10 days of his life made me angry. Why did our laws infringe upon an individual’s decision to peacefully die when dying was inevitable within a few months?

The legislation you are considering may have permitted John Rehm to have the measure of autonomy that he wanted over his own death. His own death.

He may have been able to spare himself the misery of dying from lack of water and food, he would have been able to say goodbye to his loved ones and spare us from watching him suffer further. I believe very strongly that John Rehm should have had autonomy at the end of his life.

Since John died, I’ve advocated for the passage of medical-aid-in-dying laws, traveling across the country, interviewing patients and family members, doctors, and others who either have access to medical aid in dying where they live — or want laws to be passed authorizing it.

Spending time with physicians who have cared for terminally ill patients in California and Washington, DC, I’ve learned how diligently they follow the law, assisting patients in a peaceful death with much less suffering than they would otherwise endure. This strengthened my faith in the more than 20 years of data showing no documented cases of abuse or coercion. It further confirmed that no one – not patients, doctors nor pharmacists – is required to participate once a law is in place.

Spending time with patients — and families and loved ones of patients – I’ve heard the firsthand testimony of the comfort and autonomy allowed by medical aid in dying. I’ve spoken with those who have obtained the prescribed drugs and used them, and with those who have obtained them and opted not to use them ultimately. But in every case I’ve heard, knowing that the patient had an option – whether or not they used it in the end – provided both patient and their loved ones with a much enhanced possibility of living their remaining time with increased joy – and without feeling condemned to an agonizing end of life.

Most recently, I heard from a lifelong friend of mine who lives in Colorado where he has access to this option. Hearing the relief that he and his wife expressed to me, the zest with which they are enjoying my friend’s remaining weeks – just imagine what that’s like! This is a man whose life has been full of vigor, and I can hear it in his spirit still.

This is a gift that not all of us would opt to use, but how can any of us deny it from a terminally ill patient who would? Indeed, can you think of a more personal moment than the time of one’s death?

I believe absolutely that laws permitting medical aid in dying affirm for my dear friend and others like him a precious individual right to autonomy at the end of life.

My philosophy in the matter is to respect that singularly personal moment for each of us. If you believe that only God should decide the time and circumstances of your death, I support you 100%. If you want every possible benefit of medical science to keep you alive as long as possible, I support you 100% as well. AND, for me and everyone else who wants the option of medical aid in dying when our time comes — we want to be supported 100% as well.

And so, again I thank you for hearing me today… and I ask you to please pass this bill into law, authorizing medical aid in dying for those terminally ill Marylanders who seek it.