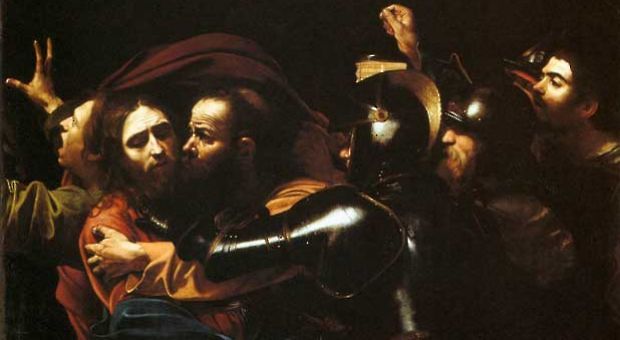 Caravaggio's "The Taking of Christ" The National Gallery of Ireland

Caravaggio was one of Europe’s greatest artists. He was also one of its most flawed. Painting in the late 16th and early 17th century, his biblical paintings were dark, realistic and extremely intense. His bad boy genius was in direct contrast to the classical style of the time. His style sparked an artistic revolution and the beginning of the Baroque period. But while he attracted commissions from priests, he cavorted with prostitutes. According to a new book, he may even have been a pimp. Author Andrew Graham-Dixon joins us to discuss the gritty genius of Caravaggio.

Caravaggio was dead before he was 40, but in his short life, he managed to turn art on its head. His passion for dramatic light defined 17th century art. But he lived his life in a shadowy world of criminals, pimps and prostitutes. Author Andrew Graham-Dixon’s new book on Caravaggio traces the origins of the artist’s genius – and his demons.

For some art historians and enthusiasts, including Graham-Dixon, Caravaggio was so important that they see a split in art history between the times before, and after, his work. Caravaggio began painting around the 1590s, when the church was in crisis and Italian painters had, in some sense, lost heart. “Caravaggio suddenly put into it blood, guts, thunder, drama, excitement. He brought the stories of the Christian faith right into people’s hearts by setting those stories in the here and now,” Graham-Dixon said.

A “Cinematic” Attention to Light

Caravaggio was one of the first artists to light his paintings as if he was lighting a scene on a film set, though no one is sure exactly how he was able to accomplish this or where he got the idea. Graham-Dixon found records that one of Caravaggio’s landlords had thrown him out of her building because he had damaged the ceiling, and the author suspects Caravaggio might have knocked a hole in the roof to get better light for his work. Director Martin Scorsese has said that Caravaggio’s work greatly influenced his early cinema, in his films like “Mean Streets” and “Taxi Driver.”

A Life of Violence

When he was 6 years old, Caravaggio lost nearly every close relative to the plague within several days. He went on to have a terribly difficult life, and to become a violent man. “The pope and the cardinals, they want him to be part of their world but he just somehow can’t be that kind of artist. He can’t be the artist who doths his cap, the courtier artists like Michelangelo or Raphael before him,” Graham-Dixon said. Caravaggio was known as a sword-fighter, and as a man who frequently visited prostitutes. But the author always tried to see the logic behind what to some others seemed to be the artist’s simple hot-headedness. In one case, Caravaggio smashed a plate of food into a Roman waiter’s face because his artichokes had been cooked in butter instead of olive oil. Because the artist was from northern Italy, and Roman artichokes were almost always cooked in olive oil, Caravaggio took the plate of food for what it probably was – what Graham-Dixon called “a racial insult disguised as a piece of food.”

“Everything About Him Was Black”