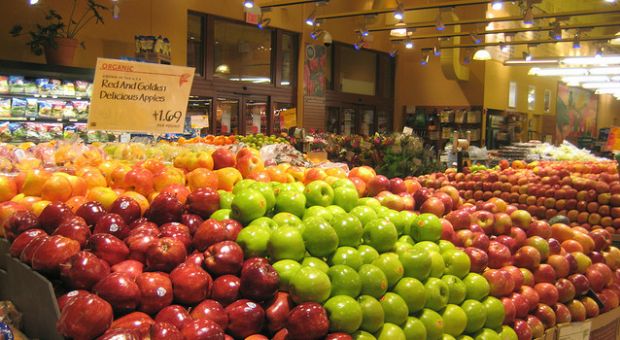 The market for organic food has grown from just $1 billion in 1990 to nearly $30 billion today. As big corporations enter the market, concern has grown about enforcement of organic standards, and some see the movement drifting away from its founding principles of sustainability and local farming. They are alarmed by organic tomatoes grown in far-off, Mexican deserts that require constant irrigation, organic cows living on industrial-sized feedlots, and chickens laying organic eggs while confined in high-capacity barns. But others say that big farms bring organic food to the masses. For this month’s Environmental Outlook series: the organic food paradox.

In 2002, the USDA established legal standards for organic food. Since that time, the market has grown into a $30 billion business. As organic food goes mass market, it raises concerns about enforcement and whether organics are drifting away from core values of sustainability and local
farming.

Organic food represents a $30 billion industry that grew at 10 percent even through the recession, Rosenthal said. Organic food is more available now than ever before. Diane wondered if it is really better for people. Rosenthal said she is concerned not only with the health benefits of organic food, but also with whether or not it is sustainable. For example, she noticed the tomatoes in her local supermarket labeled as coming from Baja, California. After some research, she found that the area the tomatoes are grown in has to be highly irrigated and is not environmentally friendly or efficient.

The National Organic Standards Board continually assesses its guidelines and rules. McEvoy said. As stipulated by the USDA, each farm selling organic produce, whether in the U.S. or abroad, has to have an “organic system plan.” Highly qualified inspectors visit the farm, and certifiers also do unannounced inspections, sampling, and residue analysis,” McEvoy said.

Can Large Companies Do A Good Job?

Kastel believes there are a few large companies that can stick to the appropriate standards, but that there are problems with many more. For instance, the USDA recently closed legal complaints against giant industrial egg producers, some with 100,000 birds with no access to the outdoors (a requirement by the organic standards). “The organic standards are indeed scale-neutral but we feel they’re scale-limiting if they’re aggressively enforced,” Kastel said.

The Spirit Of The Law Versus The Letter Of The Law

Ropsenthal said that once something moves into the big business industrial sphere, it may be more likely that the food produced there is not what many consumers have in mind when buying organic. “I have in my mind an organic chicken farm where I see chickens wandering around. And that’s why I buy this pack of eggs,” she said. “There are a number of places that can comply with the letter of the law without really complying with the spirit of what I think of as organic agriculture. And I think that’s important to consumers,” she said.