Containing Ebola In The United States

Containing Ebola In The United States 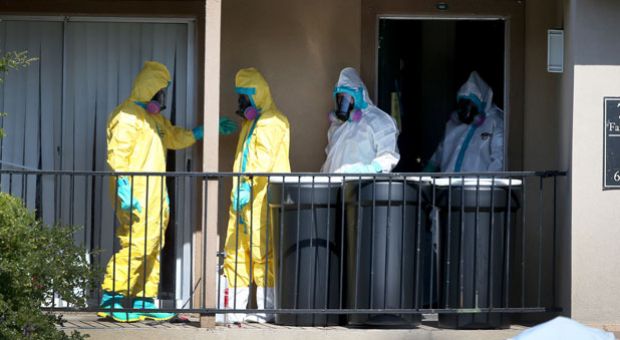 Members of the Cleaning Guys Haz Mat clean up company are seen as they sanitize the apartment where Ebola patient Thomas Eric Duncan was staying before being admitted to a hospital on Oct. 5, 2014, in Dallas, Texas. The first confirmed Ebola virus patient in the United States was staying with family members at The Ivy Apartment complex before being treated at Texas Health Presbyterian Hospital Dallas. State and local officials are working with federal officials to monitor other individuals that had contact with the confirmed patient. (Joe Raedle/Getty Images)

The sole confirmed Ebola patient in the U.S. continues to fight for his life in a Dallas hospital. American health officials remain confident in their ability to contain the disease here. But the situation in West Africa is far bleaker. The head of the Centers for Disease Control and Prevention said Sunday the virus is spreading so fast there that “it’s hard to keep up.” Even with a renewed international response, the number of cases is growing exponentially. Despite calls for stricter screening at airports, many argue the only way to prevent more cases in the U.S. is to stop the outbreak overseas. Diane and her guests discuss the challenges of containing Ebola here and abroad.