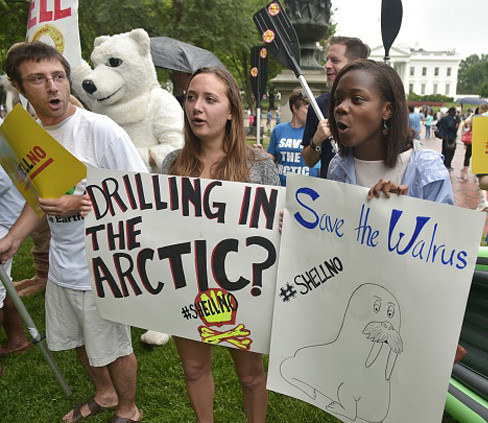 Demonstrators take part in the Shell No Day of Action to protest against arctic drilling across from the White House in Washington, D.C. President Barack Obama gave final approval for arctic drilling this week. MANDEL NGAN/AFP/Getty Images

A federal judge says Hillary Clinton violated government policy by using a private email server during her tenure as secretary of state. The Democratic candidate for president continues to defend herself over the email controversy, saying her actions were legal. Republican presidential candidates Donald Trump and Jeb Bush hold dueling town hall meetings in New Hampshire. The White House approves a final permit allowing oil drilling in the Arctic. The Federal Reserve sends mixed signals on its expected interest rate hike next month. And former President Jimmy Carter announces he has brain cancer. A panel of journalists joins Diane for analysis of the week’s top national news stories.

Video: Should We Drill In The Arctic?

Video: How Will The Arctic Drilling Decision Affect Obama's Legacy?

Video: Should The U.S. Have A Shorter Election Cycle?