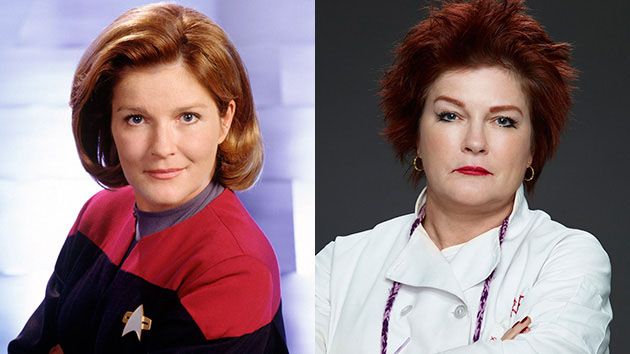 Left: Kate Mulgrew stars as Captain Kathryn Janeway in "Star Trek: Voyager." Her character was the first woman to command a Federation Starship in the more than 30-year history of "Star Trek." Right: Mulgrew stars as "Red" in the Netflix series "Orange is the New Black." The show's fifth season will air in 2017. Left: CBS Photo Archive/Delivered by Online USA. Right: Netflix

Fans of “Orange is the New Black” know Kate Mulgrew as “Red,” the prison’s tough-talking kitchen manager. “Star Trek: Voyager” fans remember her as Captain Janeway. The characters Mulgrew plays are hard-nosed and complicated, much like her. She grew up in a large Irish Catholic family with a father who drank too much and a mother who had big, unrealized dreams. Just as her career was taking off, Mulgrew became pregnant, and decided to give the baby up for adoption. In a favorite interview from the last few years, Diane spoke with Kate Mulgrew about being a mother, a daughter and an actress…and about the gift of best friends.