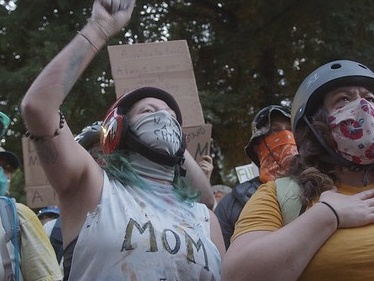 A "Wall of Moms" face off with federal agents in Portland, Oregon this past week. Tony

For nearly two months, following the killing of George Floyd, protestors have gathered in Portland, Oregon.

Then this month, videos and images surfaced of federal agents in unmarked vehicles, using force and making arrests in the city – prompting confusion and fear. The Trump administration has since said those officers are from the U.S. Customs and Border Patrol, sent by the Department of Homeland Security.

It’s a move that’s been criticized by former heads of the agency. Still, the White House says those same agents are now “standing-by” in Seattle.