Why Do We Have Toll Roads? (And A Look At The Future) 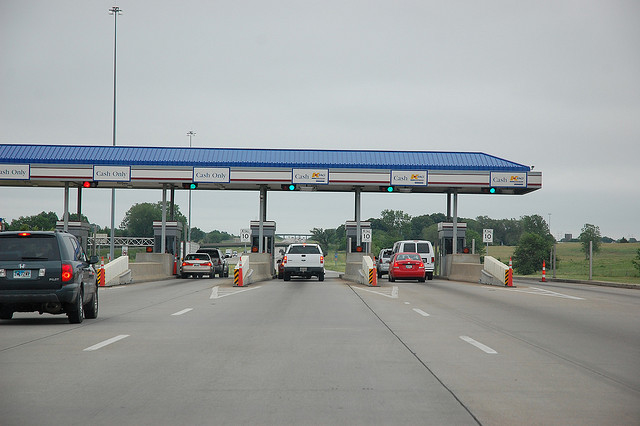 If you’re traveling for Thanksgiving, you’re probably already sick of crawling through toll booths. (Transponders help, but even those lanes can get tricky).

How did we get here?

We’re taking another look this week with a rebroadcast of our show on toll roads.

Listen: The Future Of Toll Roads

The short answer: It started in the Eisenhower administration. The toll roads are now part of this transition to try and do something about maintaining the existing system and then building out new capacity where we need it.

“We had this program in the ’50s that built out the interstates. That was a lot of federal money coming in,” said Robert Puentes a senior fellow of the Metropolitan Policy Program at The Brookings Institution.

But those days, he said, are over.

A few other things to note as we look toward the future:

Are people willing to pay for gas taxes instead of toll roads?

“There’s a fundamental problem we have in paying for the things that we all need. I mean, I think we’d all agree that, you know … our infrastructure is critical to the nation, to our economic health, to the ability of people to get to work and school and goods to market. But we have to be willing to pay for things.

Should we use private capital instead of public funds for toll roads?

“The reason these public private partnerships are happening, Diane, is because states, the federal government and local governments simply don’t have or are not willing to raise taxes to generate the right type of money to pay for revitalizing and maintaining our infrastructure.”

What can we learn from new innovative models?

“The intermountain west is really where a lot of the growth is happening in this country, a place like Phoenix and Las Vegas and Denver, in and around Texas, the new sunbelt areas. This is where a lot of the country is growing. These are the places that are also experimenting with some of these new ideas and some of these new ways of getting infrastructure built today.”