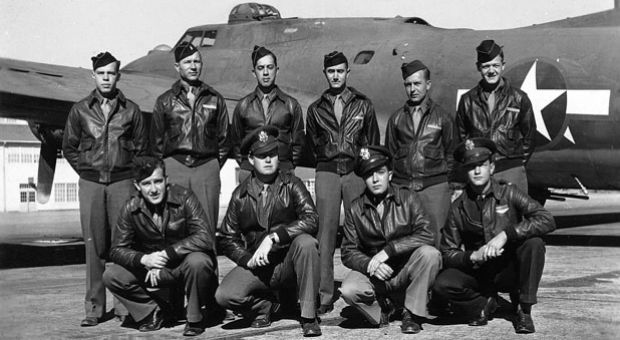 Producers’ Picks is a new series in which Diane Rehm Show producers give listeners a behind-the-scenes look at some of their favorite shows. Is there a show you want to know more about? Fill out this form.

On Dec. 20, 1943, a young American named Charlie Brown was on his first mission in World War II.

It was almost his last. While flying above Germany, Brown’s B-17 bomber was shot and badly damaged. As his wingmen tried to escort him to safety, a German fighter plane fell in line behind them. But instead of shooting the team down, as the Americans were sure it would, the German pilot, Franz Stigler, helped them escape enemy territory.

Adam Makos unearthed the incredible story in his book “A Higher Call: An Incredible True Story of Combat and Chivalry in the War-Torn Skies of World War II,” which he shared on our show in December 2012.

But producer Rebecca Kaufman took a chance on booking Makos for the program, she writes:

I knew I was taking a chance inviting Adam on — he was young and didn’t have experience doing national media. As a producer who deals with guests every day, I could tell that when Adam arrived at our studios he was nervous. He had come with his dad to provide support.

Once he went on the air, though, “it turned out I didn’t have any reason to worry about Adam. He knocked it out of the park that day proving himself a great storyteller with a great story to tell,” Kaufman writes.

Some highlights from the program:

On Finding The Story

“They said, did you ever hear of the German who let the American bomber escape? And I hadn’t. And I said, well, I haven’t, but I’m going to look into this. And that’s when I began looking for this man named Charlie Brown.”

“Their code said to fight with fearlessness and restraint, to celebrate victories, not death and to know when it was time to answer a higher call. Franz gazed at the men in the waist tending to one another’s wounds. He looked into the ashen face of the ball turret gunner. He thought about what his brother, August, would have done. A gear clicked in Franz’ soul. He laid a hand over the pocket of his jacket and felt his rosary beads within. This will be no victory for me Franz decided. I will not have this on my conscience for the rest of my life.”

On Naming The Novel

Listen: Why did Makos name the novel “A Higher Call”?

On The Pilots’ Reunion

“So he kept looking. He kept looking. Finally, he put an ad in a magazine for retired German pilots. And at his home in Vancouver, Canada, Franz Stigler wandered out to his mailbox, found his newsletter. It was 1990, January, when he opened it up and saw this ad looking for the German pilot who spared my life on December 20, 1943, north of Bremen, Germany.”

Where is Adam now? In October, he’ll be back on the show to talk about his upcoming book “Devotion.”

“When I asked him if he’d be bringing his dad with him again he no — he’ll be able to handle the pressure on his own this time!” Kaufman says.

You can listen to Adam Makos tell more war stories, this time from the “forgotten war” in Korea, on our Oct. 26 show.