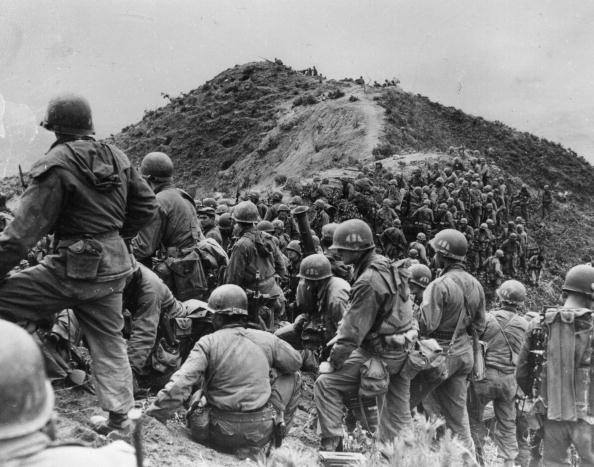 Men of the 187th US Regimental Combat Team prepare to take a ridge position somewhere in Korea in May 1951. Keystone/Getty Images

The Korean War began 65 years ago, lasted three years, and claimed nearly 40,000 American lives. Before the war began, U.S. armed forces had been integrated by President Truman. But until African-American pilot Jesse Brown came along, Navy aviators were entirely white. En route to serve in Korea, Brown met Lieutenant Tom Hudner, a white, Naval Academy graduate who would become his wingman and good friend. The two men flew combat missions supporting Marines on the ground until Jesse was shot down behind enemy lines and Tom had to make the decision of a lifetime. Diane and guest author Adam Makos discuss the true story of an unlikely friendship during the Korean War that crossed the racial divide.

Excerpted from DEVOTION by Adam Makos Copyright © 2015 by Adam Makos. Excerpted by permission of Ballantine Books, an imprint of Random House, a division of Penguin Random House LLC. All rights reserved. No part of this excerpt may be reproduced or reprinted without permission in writing from the publisher.

Devotion: An Epic Story of Heroism, Friendship, and Sacrifice