Producers’ Picks: Robotic Arms And Other Advances In Prosthetic Limbs 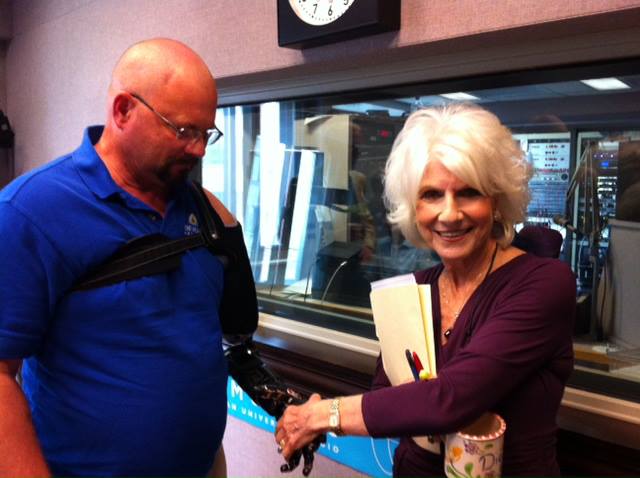 Producers’ Picks is a new series in which Diane Rehm Show producers give listeners a behind-the-scenes look at some of their favorite shows. Is there a show you want to know more about? Fill out this form.

Most of the 2 million Americans who have had to amputate an arm or leg choose to wear prosthetic limbs.

As recently as a decade ago, that wasn’t always easy. Most artificial limbs were at once both clunky and fragile, and sometimes, hard to wear (let alone repair).

But it doesn’t have to be that way, scientists told us on one of our favorite 2013 programs.

Research fueled largely by the treatment of  American soldiers wounded in Iraq and Afghanistan has let scientists make great strides in the prosthetic arms, legs, hands and feet now available to patients across the country. Robotic knees and ankles can adjust to different terrains and activities, and can even help amputees climb mountains, run marathons and skydive.

And they brought their latest inventions to our studio to prove it.

Michael McLoughlin, an engineer and principal investigator at the Johns Hopkins University Applied Physics Lab, showed us a robotic arm that can restore an amputee’s sense of touch.

At the time, there were only six of these arms being tested around the world.

“I remember Diane and I were completely amazed by [the prosthetic arm’s] lifelike movement,” producer Danielle Knight recalls.

One of them: “Johnny Matheny, an amputee patient, showed us how he could get the arm to hold a spoon and a ball simply by moving the muscles on his existing upper shoulder, which attached to sensors in the prosthetic limb,” Knight writes.

It felt like an inspiring glimpse of the future, Knight says — like “in Star Wars when Luke Skywalker gets fitted with a robotic arm.”

Best of all: We captured the show on video, so you can see the arm in action in our studio.

Two years later, Johns Hopkins’ Lab continues its work on the limbs. What will we see next? We’ll have to book another show to find out!

Is there a show you want to know more about? Fill out this form.