Your Stories On Racism In The U.S., Then And Now 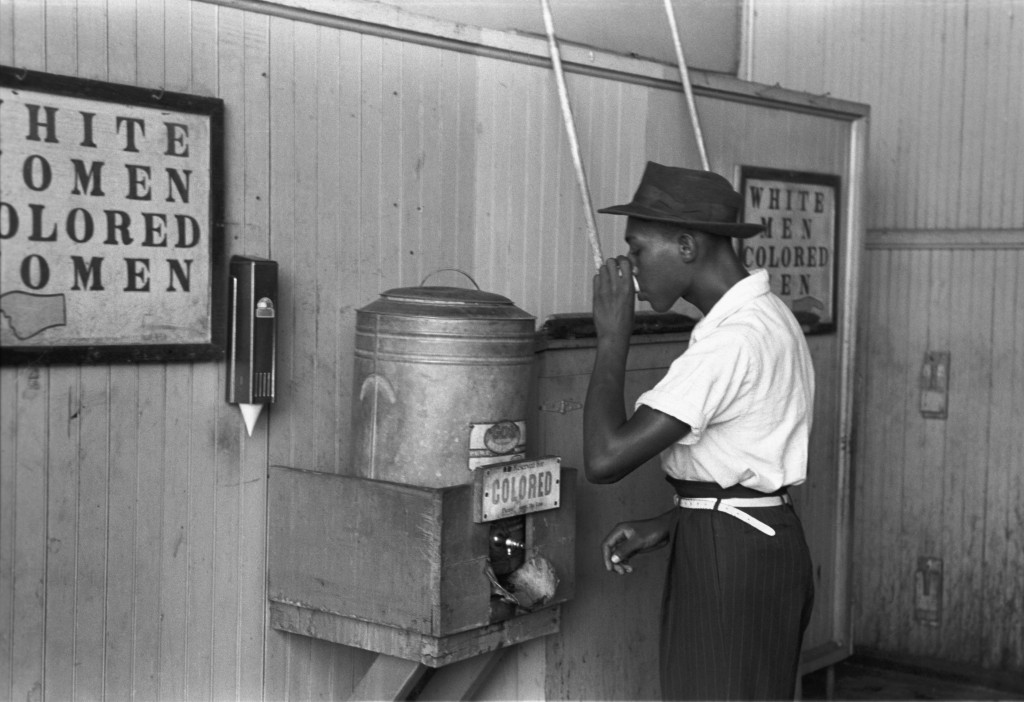 In Oklahoma City in 1939, a black man drinks from a "colored" drinking fountain. Russell Lee/Wikimedia Commons

In our program about growing up in the American South under Jim Crow laws, Charles Dew, a Williams College history professor and author of “The Making Of A Racist,” recalled an upbringing that taught him he was superior to black Americans. The stories he shared, as well as journalist Isabel Wilkerson’s research into black Americans’ migration from the South, brought back memories for our listeners. Dozens of people filled our email inbox with their own accounts of racism in the South, and how it has—or hasn’t—changed.

We can’t talk enough, DonnaLea, 85, wrote, about how we deal with race in the U.S., both now and in the past. In honor of the show’s Labor Day rebroadcast, we shared with Dew some of the many listener stories that didn’t get on air.

Read those messages, and Dew’s responses, below:

“I went to a very small school in Southeast Kansas. All classes had recess at the same time. I was a 4th grader, and I played with 2 little black girls who were younger than I was. I noticed no one else played with them. I didn’t understand it … One day as I went in after recess, a teacher said for me to wait at the door. She wanted to talk to me privately. I was stunned when she told me that she ‘heard’ some people [say] that if I didn’t stop playing with these girls, something bad might happen to my Daddy at work. I was so terrified that I immediately stopped playing with them, and I never even told my parents. I often think of them and wish I could tell them what happened. I would never have given up their friendships of my own volition.”

Charles Dew: You experienced one of those moments Lillian Smith talks about in her wonderful book, “Killers of the Dream“—that first lightning bolt that reveals to a child the existence of racial bigotry. That flash happened, and I suspect still happens, on both sides of the color line. I would guess that because this was seared in your memory, it has served you well in your later life. It has made you aware of racism, and your message suggests to me that you have made it a point not to let this sort of thing happen to you again. Being your own person is very hard when you are a young child, but having the courage to speak up as an adult is worth doing, always. Keep up the good work.

“Unlike Mr. Dew, I did question and took small personal actions against the systemic racism as a child. I did stand up and question the way things were. I did cause a family blowup that ended my relationship with my maternal grandmother when I was 14; for the rest of her life we never spoke again. She died in the mid-’70s. I helped an African-American woman get registered to vote quietly and by gaming the system. I am an introvert, so I am not a protester or marcher, but in my own quiet way I stood/stand up for what I believe in. I have many friends who took similar actions as children growing up in the Deep South. Charles Dew, I will admit, represented the majority of southerners in our generation; he does not represent all of us.”

“My father, a black man, has always insisted that people who hold to racist, sexist, bigoted beliefs must be challenged. We live in Florida, and he is often challenging co-workers who make veiled racist jokes and promote sexist stereotypes about how those comments are inappropriate. I must say, he is much braver than I am. Truthfully, I admire his courage but I often fear for his safety as a black man challenging people who hold these beliefs. He does much to assert his dignity as a black man, but sadly, having dignity can still be dangerous in 2016.”

CD: I admire your courage more than I can say, Cara. I wish I had been as brave as you when I was your age. The family blowup you describe is the price you paid for having the courage of your convictions. I am a little older than you, but that does not excuse my blindness to what was going on all around me in the 1950s. It took my journey north to college, and the better part of four years, to show me the realities of the Jim Crow system I had been living with—and not seeing—for my first 17 years. It is very good to know that you and others like you were doing what you could to make up for the timidity of others (like me, for far too long). Well done.

And I stand in awe of Amanda’s father, who refuses to be quiet in the face of bigoted comments. It is truly incredible what one voice can do when the person has the courage to speak out, even at the risk of personal danger, like your father. My wife (the writer Robb Forman Dew) and I have a gay son, and we respond immediately to ANY bigoted comments we hear uttered, directed at LGBT men and women and anyone else, for that matter. It not only has a positive effect on the person who hears us speak out. It is good for us as well, since we do not internalize the anger we feel if we listen silently to what has been said.

“I’m 47 and a white woman raised in Virginia. I went to an all-white elementary school, where, when I was in 5th grade, a black girl was in my class and her brother was in my brother’s 2nd grade class. We liked them and got along fine even though they were the only black family in my town. After two weeks, the boy and girl no longer came to school. We asked why and didn’t get an answer until our parents told us that the KKK burned crosses and threw bricks through their windows every night of those two weeks until they moved for their own safety.”

CD: Erin describes a situation that was repeated all too frequently in all parts of the country. Isabel Wilkerson’s magnificent history of the Great Migration of African Americans to the North and West, “The Warmth of Other Suns,” tells this sad tale over and over again. Some of these she told on the Diane Rehm Show when we were on together. If only people would bring a gift of a casserole to a new neighbor instead of hatred and bigotry—think of what a better world all of us would live in. The KKK is gone from almost everywhere now, but that undercurrent of racism is still coursing through our country. Any act of kindness any of us can do across the color line (that still remains a reality in our country, unfortunately) is worth doing. I like to think of this as a cosmic process—do a nice thing, any nice thing, and it may well be returned to you. And if not, you have still done a nice thing.

“I was not taught to hate black people, yet my mother would not allow me to attend a dance with my black male friend because of fear of what could happen to me as a white girl attending a dance with a black male. My friend, Chris, wanted to take me [when] ‘his’ side of town had a dance. He and I were not romantically involved, just black and white, boy and girl best friends. I was not allowed to go, although my mother did not fear Chris, only the black crowd and what they could do to me. I feel to this day, I would have had a great time, I would have been welcomed and no harm would have come my way.”

CD: MapleLeaf touches on the almost primal fear that whites had in the South (and other parts of the country as well) of a sexual crossing of the color line. I talk about this at some length in my book. I am sure you would have been perfectly fine with your friend Chris, but parents were convinced that if any sort of integration occurred, the result would be black male sexual advances toward white females. In “The Making of a Racist,” I trace these thoughts as far back as Thomas Jefferson, who feared a “staining of the blood” of the white race if emancipation occurred in his slave South. The only way to challenge this nonsense is to call it just that, nonsense. I’m sorry this happened to you, MapleLeaf, but I gather you learned from your disappointment at missing out on what would, I’m sure, been the “great time” you describe. So that is something positive that came from your experience on this occasion. We all can learn from things like this, or at least we should, and you obviously did. So good for you.

“I am a 68-year-old Black woman and that book touched me to my core. Having grown up in Atlantic City, NJ, I was sheltered from the ugliness of racism. Our parents tended to shield the children while they absorbed the arrows of the indignities of hate. Although not bitter, my dearest Uncle Eddie has been sharing so many of his experiences in the Navy when Blacks (Colored) were admitted to the Navy’s first aviation school in 1943 to see ‘if they were intelligent enough to comprehend’ the principles of flying. He graduated among the top in the class but they were never allowed to fly. They were given menial jobs. His disappointment was so great that when offered an incentive to re-up in the Navy, he declined.”

CD: Ivy, you had remarkable parents who obviously looked out for their children in truly extraordinary ways. Your Uncle Eddie’s experience in the Navy in WWII was all too typical, and was totally unjustified. President Harry Truman did one of the best things an American president has ever done when he ordered the integration of all of our armed forces in 1948, and I hope your uncle was able to take some small satisfaction in that. Our military is probably the most thoroughly integrated institution in the United States today, and it is also one of the most admired and respected. Those two things are joined at the hip–honor, duty, justice, service, sacrifice, all without regard to race, or color, or religion or sexual orientation. Those are principles in which we Americans can all take pride, it seems to me. It is too bad your uncle was not able to enjoy these circumstances when all he wanted to do was to take to the air in defense of his country. No, it is more than “too bad;” it was disgraceful.

As Isabel Wilkerson said during the show, we’re only just coming to an understanding of what America’s history of racism means for its future. A great way to do that, she said: Tell more stories.

“More people need to tell their stories, to understand how it is that we got to where we are,” Wilkerson said. “We need to recognize that we all have been exposed to toxins in the way that we view one another.”

You can hear more listeners’ stories in our full interview with Dew and Wilkerson. Do you have one of your own to share? We’d love to hear it! Tell us in the comments or via email.