15 Years After Sept. 11: What We Forget When We Remember Terror Attacks 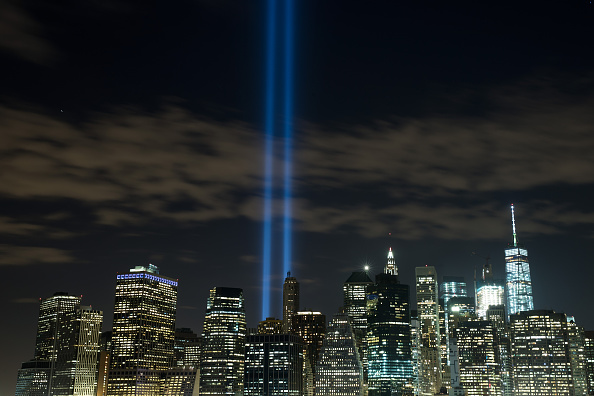 The 'Tribute in Light' rises from the Lower Manhattan skyline Sept. 7. The lights were being tested in advance of the 15th anniversary of the Sept. 11 terrorist attacks. Photo by Drew Angerer/Getty Images

On Sunday, the United States will mark the 15-year anniversary of the terror attacks of Sept. 11, 2001. The attacks killed nearly 3,000 Americans, launched the “war on terror” and inspired a debate pitting security against liberty.

But how have such moments of mass fear and terror come to be understood and remembered in popular culture?

Attacks on the U.S. have often been depicted as acts of moral turpitude inflicted on a peace-loving, free people. Equally, perhaps more powerfully, the traumas have become embedded in the American mind as moments of individual heroism, calls to arms, in which courage trumps fear, light conquers darkness and the essential decency of the American character is brought into sharp relief.

While such memorializing isn’t necessarily wrong (heroism, outrage, and bravery have constituted one response to attacks), these memories don’t tell the full story. They ultimately blot out the bewildering sense of fear and hysteria that attended the traumatic event; what gets erased is the memory of just how much fear emerged in the aftermath.

We’ve seen it many times over the years: 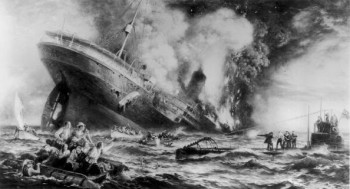 The sinking of the Cunard ocean liner ‘Lusitania’ by a German submarine is seen on May 7, 1915 off the Old Head of Kinsale, Ireland. (Three Lions/Getty Images)

The sinking of the ocean liner, which killed hundreds of civilians including Americans, ignited a violent, hysterical crackdown on German-Americans in the United States suspected of treason. The attack fostered a national unity and militarism. Recruitment posters—emblazoned with calls to “remember the Lusitania”—encouraged Americans to enlist in the military and avenge the evil act. 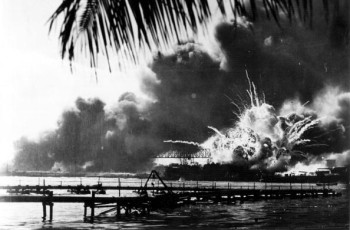 The bombing is typically recalled as the moment when Americans patriotically responded by planting victory gardens and enlisting in the Army, to liberate the world from fascism and deliver America from fear. President Franklin D. Roosevelt memorably called Pearl Harbor “a day which will live in infamy.”

Much less remembered is that the attacks also produced a spasm of fear.

The day after the attack, more than one thousand Seattle residents rioted when some of their fellow citizens refused to turn out their store lights during a citywide blackout to protect against air raids. The White House was closed to the public. And, riding through the capital in a police cruiser, New York mayor Fiorello La Guardia, who was pulling double duty as director of the Office of Civilian Defense, shouted into a loudspeaker, “Calm, Calm, Calm!”—which wasn’t calming.

Driven by the belief that Pearl Harbor awoke a slumbering democratic giant, Americans have often forgotten that fears—of Japanese-American fifth columns, air raids and imminent invasion—have almost entirely been written out of our collective memory of that day. 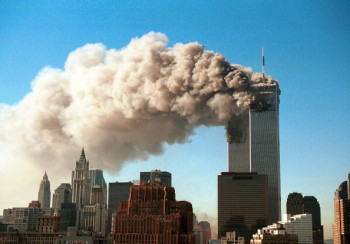 Smoke pours from the twin towers of the World Trade Center after they were hit Sept. 11, 2001 by two hijacked airliners in a terrorist attack in New York City. (Robert Giroux/Getty Images)

The Sept. 11 attacks are remembered as a moment of horror in which thousands of civilians died terrible deaths and America’s military and commercial centers were targeted. At the same time, as President George W. Bush said in his Ellis Island address marking the attack’s first anniversary, the response to the attacks also revealed “the character that will deliver us.” Thus, a story of heroism, based on individual strength and an American brand of courage in conquering fear, was embedded in the culture. A story of American greatness also surfaced.

On this 15-year anniversary, at the same time that we recall the extraordinary heroism and bravery so vividly etched in our memory, it’s also worth observing that the United States is still very much afraid. Though the concept of fear won’t be a featured element in this weekend’s remembrances, acknowledging fear will enable the nation to cope with it. As Eleanor Roosevelt admonished Los Angeles residents days after Pearl Harbor, it’s okay to feel afraid, but let’s act “as though we’re not afraid.”

Matthew Dallek, associate professor at George Washington’s Graduate School of Political Management, is author of Defenseless Under the Night: The Roosevelt Years and the Origins of Homeland Security. Listen to Dallek’s interview on security and democracy from our show in July.