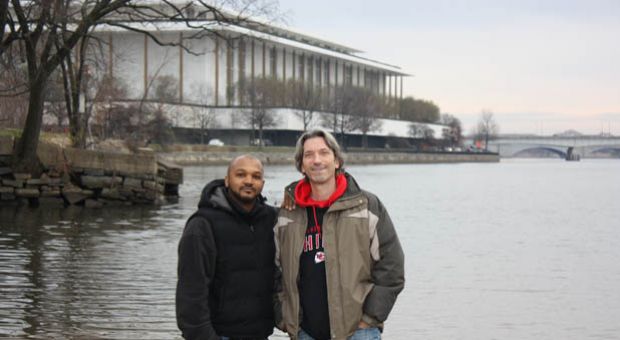 One was a 20-year-old Irish Catholic who had been a Georgetown University student in Washington. The other was a seven-year-old African American boy living in a D.C. homeless shelter. Their paths crossed in one of life’s random moments and altered both of them forever. The college student became a well-known human rights champion who works with George Clooney and other Hollywood activists. The boy from the streets became a drug dealer – before turning his life around. In a new book, and in an interview with Diane, they tell their story. How a brotherly bond forged decades ago helped each of them find their way in the world and taught them the power of commitment.

When, as a young man, John Prendergast decided to become a big brother to Michael Mattocks, he wasn’t sure he could identify his motivations for joining the program. But now, decades later and after they two have co-written a memoir about their enduring friendship, Prendergast realizes he became a big brother at least partially because he was a “sad person” at the time.

“In any kind of memoir, you really have to examine your motivations. Why did you do this stuff? I was a…depressed person, and I was looking to fill a void with external things.”

Michael, who was 7 years old at the time the two met, says his first memory of John was a happy one. “He asked me and my brother if we knew how to read,” Mattocks said. He and his family were living in a homeless shelter at the time.

Mattocks’ mother was young, and his family was bouncing from shelter to shelter. Sometimes all he and his brother would have to eat in a day was cereal. He remembers his mother and other relatives crying when his Aunt was beaten to death by her husband.

“[Her husband] wrapped her body in plastic and stuffed her body in a wall. And he made her kids help. And he plastered over the wall,” Mattocks said.

Prendergast, who grew up in a stable working-class family, had a relationship with his father that was rocky and very tense at times. He was a Korean War veteran, and he couldn’t accept any kind of deviation from his rules, Prendergast said. “As soon as I would begin to assert my own individuality and independence…he was very abusive and it became a very very hard situation for me,” he said.

But when Prendergast would bring Mattocks and his brothers home, his father would welcome them as if they were his own children. ” He lit up like a Christmas tree when they were around. Even though I wasn’t speaking to him, I admired him and was so grateful for the model he was providing for the kids,” Prendergast said.

As Predergast grew older, he decided he could make a difference in the human rights campaigns in parts of Africa, including Ethiopia, and he traveled abroad for months at a time. During that period, Michael was enticed by street life and fell into a pattern of taking and selling drugs.

“What was happening in your life when you were selling drugs?” Diane asked.

“It was painful. I hurt a lot of people. There was a lot going on. My mom was hurt. And I was using drugs, drinking, carrying a gun. I was out there doing grown-men things. I lost my best friend. He got shot in the face with a .45. I saw that and it hurt me so bad,” Mattocks said.

Prendergast admits that in hindsight, he wasn’t there in Michael’s darkest hour, when Michael needed him the most. But eventually, Prendergast did come back from Africa, and the two reconnected.

For Mattocks, in addition to Prendergast’s friendship, it was his wife and kids that really helped him turn his life around. He cleaned himself up, got off the streets, got his commercial driver’s license, and now drives buses for a living, which he loves.

John admits that he could have been a better big brother. But today, he tries to spread the word that anyone can volunteer and make a huge difference in a youth’s life. “I sort of hung around, and the fact that I was around, he thinks, is one of the reasons he could make it through the darkest parts of his life,” Prendergast said of Michael.

John and Michael stayed after the show to answer some questions we couldn’t get to on the air.####

Q: John, may times you’ve been in physical danger requiring a lot of courage. How does that compare with the emotional courage it took to write this book?

A: They certainly are different categories of fortitude! In African war zones, your adrenaline is going and you just have more of a sense of ‘whatever will be, will be.’ And you get through it. There is a major psychic toll later, but at the time you see all the suffering around you and you don’t wanna complain or show the emotions you might be feeling. I think after a decade or so I began to become a little numb, which is certainly not good for emotional health and stability. So writing this book has been a bit cathartic, because I was able to go back and look at the things I have been through and re-process them, or better yet process them for the first time, and come to terms with some of the more difficult memories. And of course there is the trauma from my childhood in the mix as well. I wish my dad was still around to read this. We never did have a real conversation or meeting of the minds about all the madness that went on in our home when I was growing up. This book I think could have opened up some doors to understanding, or at least acknowledging, the pain and vulnerability that I felt as a little kid.

Q: Michael, what was it like writing the book?

A: It was painful writing the book. I had to bring back all those memories. At the same time, I was excited to tell my story. I hope it can help out others that are in difficult situations, that they can overcome painful things in their lives.

Q: John, why has it been so important for you to fight injustice?

A: I felt very early on an affinity with those who would stand up against things that are wrong. I felt injustice ACUTELY, at a cellular level, for many complicated reasons I try to plumb in the book. So when given an opportunity to fight against human rights abuses in Africa, I feel utterly compelled to do all I can. And when I had the chance to be there for Michael and his siblings as they made their way from homeless shelter to homeless shelter, I again felt compelled.

Q: Michael, it was hard for you at first to have a steady job that paid so little compared to what you earned as a drug dealer. How did you come to terms with that?

A: My wife helped me. She told me I wasn’t on the streets any more, and I had to maintain.

Q: Michael, you told Diane that you love your job driving a bus. What do you love about it?

A: Sitting in that bus puts me in an indescribable zone. It’s like you are in heaven. I am so relaxed and focused on what I have to do. Everything in my brain just goes away and I am just focused on driving that bus. It’s like nothing else in my life. Unbelievable. I love that bus!