Kennedy Warne: “Let Them Eat Shrimp: The Tragic Disappearance of the Rainforests of the Sea”

Kennedy Warne: “Let Them Eat Shrimp: The Tragic Disappearance of the Rainforests of the Sea” 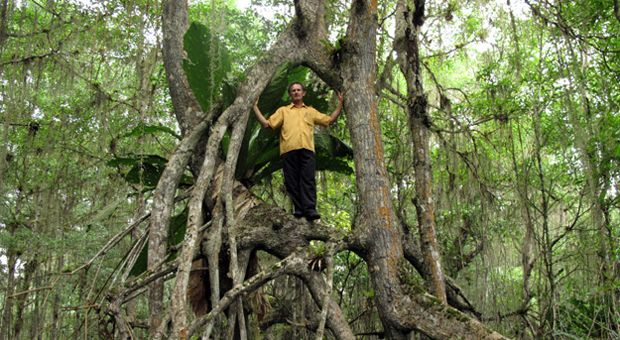 John Steinbeck once said “no one likes the mangroves.” But New Zealand marine biologist Kennedy Warne argues they are simply misunderstood. There are seventy species of mangroves, ranging from trees to shrubs to ferns. What defines them is their unique ability to thrive in heat, mud and salt that would kill an ordinary plant. Mangrove forests support a wealth of animal and plant species. They provide food, medicine, work and homes for millions of coastal people. But development and shrimp aquaculture are threatening their existence. Warne explains the importance of these rainforests of the sea and how we can help protect them.

Many people have never heard of mangrove forests, but they are nurseries for a vast variety of animals and plants. They act as supermarkets of the sea for humans, providing shellfish, crabs, honey, timber and charcoal, and they’re also good storm barriers. To shrimp farmers and real estate developers, they represent a good investment, but at the cost of local ecosystems and the people who rely on them. Environmentalist Kennedy Warne has written a book about what he calls the tragic disappearance of these rainforests of the sea.

How Shrimp Farms Are Harming Mangroves

They May Smell, But They’re Still Wondrous

There is a wide variety of mangroves – as many as 70 species, according to Warne, including hibiscus, holly, and palm. What they have in common is the ability to withstand a saltwater environment that would kill an ordinary plant within days, or even hours. But there’s not much oxygen in the soil in a Mangrove forest, which can contirbute to a pervasive sulphurous smell, and the swampy conditions are ideal for mosquito breeding. They serve as such a huge source of food in many countries that Warne refers to them as an “ecological Swiss army knife.” Mangroves are also one of nature’s best carbon sequestration plants, which could help diminish the ill effects of climate change.

The 2004 Indian Ocean tsunami made some countries in Southeast Asia and the wider region realize the cost of having removed some of the natural coastal barriers like mangroves. Warne admits that even mangroves couldn’t have stopped a 30-foot high tsunami wave, but climate scientists are predicting an uptick in more forceful hurricanes and cyclones. But the arguments for saving the mangroves for barrier reasons is difficult to make in the face of the value of those areas of land. For commercial fisheries, an acre of Mangrove area could be worth as much as $30,000, and the people who live alongside the mangroves have traditionally not had a strong political voice.

What Can The Rest Of The World Do?

Consumers everywhere should try to make a connection to where their food comes from, Warne said. Ninety percent of the shrimp that comes in to the U.S. isn’t coming from wild shrimp fisheries, Warne said – it’s coming from exports from the developing world. There is also a move in the political arena toward certifying the sustainability of shrimp. Warne would also like to see greater social justice for the people of the mangroves who have lost their way of life and, in some cases, their livelihoods.