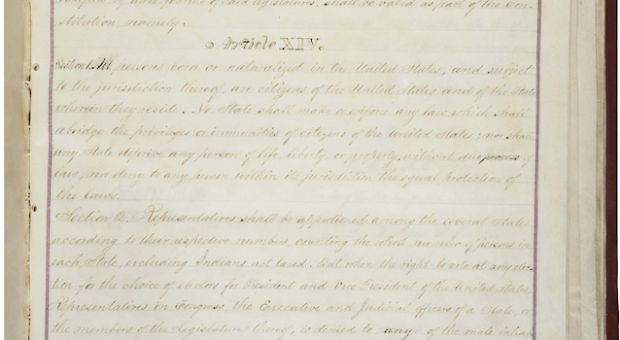 The Fifth Amendment was added to the United States Constitution in 1791 as part of the Bill of Rights. It includes the right to a grand jury trial, the right to not be tried twice for the same crime, and the well-known “right to remain silent.” But the Fifth Amendment also bars the government from taking private property without fair payment, and only for the “public good.” Today, as part of our ongoing Constitution Today series, we examine the origins and evolution of the 5th Amendment, and how the case of the “Little Pink House” altered the Eminent Domain protection forever.

Most of us know the Fifth Amendment for its famous right to remain silent, but the Constitution also guarantees property owners fair payment for land the government takes to build highways, protect natural resources, and even to renew urban areas. As part of our Constitution Today series, we move beyond “pleading the Fifth” to examine the delicate balance of the imminent domain clause.

What Protections Does The Fifth Amendment Offer?

Rosen outlined the main tenants of the Fifth Amendment. First, if you’re going to be indicted for capital and specific offenses, first you have to be indicted by a grand jury. It also outlines the “Double Jeopardy” clause, which says you can’t be convicted or acquitted of a crime and then tried for that crime again. There’s the “self incrimination” clause which gives us the Miranda warnings and the ability not to be forced to testify in court in ways that could hurt you in a future case. There’s the due process clause, which ensures no one shall be deprived of life, liberty or property without due process of law. And finally, there’s the protection against private property being taken for public use without just compensation.

When And Why Was It Added To The Constitution?

The Fifth Amendment wasn’t part of the original Constitution. James Madison was strongly against the idea of a Bill of Rights, but George Mason strongly favored it from the beginning. Quinn believes that chief among his concerns was probably the fear that some right would be left out if we tried to list them, and that it might also create the impression that our rights come from the government when the political theory of the country is based on the idea that we have natural rights. But Madison
changed his mind, and pledged to introduce the Bill of Rights in the first Congress once the Constitution was ratified.

Limitations To The Amendment

Diane asked the guests if they think the Fifth Amendment protections have been limited too much in the hundreds of years since its creation. Wiener doesn’t think so. For instance, double jeopardy can’t be limited too much. But concerning the eminent domain clause, complications have arisen, such as when “just compensation” isn’t desired by a private citizen. “For the property owner, it’s not about money,” he said. “It’s about the marks on the inside of your closet when you saw your child at age eight, at age twelve, at age eighteen,” he said. Landmark cases involving this clause have been centered on whether or not, and when, the regulation goes too far. “Essentially the Supreme Court has said that when you completely destroy the value of a property making it impossible for a landowner to build at all, then compensation is necessary,” Rosen said.

A caller from upstate New York wondered if land that was taken from his grandfather in the 1950s under public domain for a public school and is now slated to be used as a daycare or other for-profit business. He wondered if landowners have any recourse given the change of purpose for the land. Weiner said there was a case to be made and that there are precedents for owners receiving compensation when public use of private land ceases.