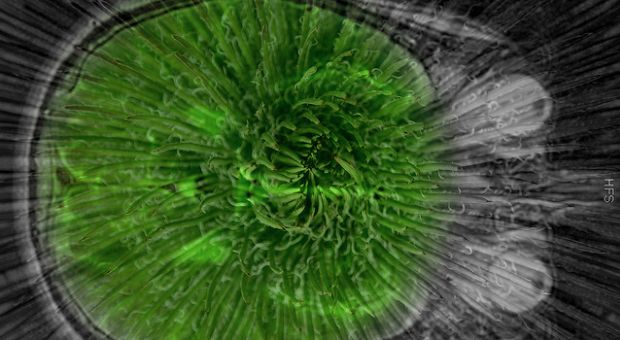 Collage created using two overlayed images, one of a cactus, the other of a real MRI of a brain, from the top of the skull RightBrainPhotography via Flickr: http://www.flickr.com/photos/rightbrainphotography

Neuropsychologist Richard Davidson and science writer Sharon Begley explain how your brain chemistry affects the way you think, feel and live – and whether you can change your emotional style. Many neuroscientists used to believe that thinking and emotions run on separate brain circuitry. But new studies using neuroimaging have challenged conventional notions about the brain’s role in emotions. Davidson has identified distinct emotional styles and their connection to patterns of activity throughout the brain. Locating the bases of emotion partly in the brain’s seat of reason implies people have a greater ability to change than was once thought. In their new book, Davidson and Begley argue that we can retrain our brains so that we can become more resilient, less negative and, possibly, happier. The science behind emotions.

Neuroscientist Richard Davidson has long been fascinated by differing reactions people have to life’s up and downs. He set out to learn why some people bounce back from a traumatic event while others are devastated for years, why some have a sunny outlook and others are gloomy. Davidson and his co-author Sharon Begley have written a new book titled “The Emotional Life of Your Brain.”

Why Has Brain Research Lagged?

Diane wondered why brain research seems to have lagged so far behind other research. Begley believes that scientists interested in brain study focused on thinking, reasoning and judgment for a long time. Emotions, Begley said, were like the “riff raff” of the brain. “It really was the stepchild for neuroscience research for many, many years,” Begley said.

Cognitive therapy primarily involves teaching people to think differently about the causes of their behavior, Davidson said. “So if something bad happens, if we’re confronted by some adverse event in the environment, rather than attributing that negative thing to ourselves – let’s say we don’t get a job promotion that we were expecting. Rather than attributing it to some flaw in ourselves and some consistent attribute of our behavior, we learn to reinterpret it and to adopt a larger perspective,” Davidson said. Changing thinking like this can be a first step to changing behavior, he said.

What Is “Emotional Style?”

Emotional style refers to how you react to what life throws at you, Begley said. Many people who’ve had a bad day at the office and come home and take it out on a spouse don’t even realize what they’re doing, she said. “That is an aspect of self-awareness, being attuned to the emotional
signals that your body sends you,” she said. The authors have also identified what they call “sensitivity to context,” which refers to modulating your emotional behavior based on the context in which you find yourself. For example, soliders who experience post-traumatic stress
disorder may find themselves having a panic attack upon hearing a siren in their residential neighborhood after they’ve returned from a war zone. Davidson said this is because they’re unable in that moment to calibrate their behavior to this different environment.

Begley and Davidson encourage people to look honestly at their own character traits to try to figure out their levels of resilience. Begley asks if you lose your dollar in the vending machine could ruin your morning, or your whole day. The book includes six questionnaires for six
different dimensions of emotional style to try to help people figure out where they are now and whether they want to move themselves along any of the dimensions.

Take A Quiz From “The Emotional Life Of Your Brain:”

Depending on whom we are interacting with and in what circumstances, there are different rules and expectations—for interactions with close friends, people you know only slightly, family members, coworkers, or superiors. Noth­ing good can come of treating your boss like a child, or of treating the cop who just pulled you over like a drinking buddy, let alone treating a coworker like a lover. Sensitivity to the rules of social engagement and the capacity to regulate our emotions and behavior accordingly varies enormously among people. You can think of the Sensitivity to Context dimension of Emotional Style as the outer-directed version of the Self-Awareness style: Just as the latter reflects how attuned you are to your own physiological and emotional cues, so Sensi­tivity to Context reflects how attuned you are to the social environment.

In the lab, we measure this dimension by determining how emotional be­havior varies with social context. For example, toddlers tend to be wary in unfamiliar circumstances such as a lab but not in a familiar environment. A toddler who seems perpetually wary at home is therefore probably insensitive to context. For adults, we test Sensitivity to Context by conducting the first round of tests in one room and then a second round in a different room. By determining to what extent emotional responses vary by the environment in which testing occurs, we can infer how keenly someone perceives and feels the effects of context. We also make brain measurements: The hippocampus ap­pears to play an especially important role in apprehending context, so we measure hippocampal function and structure with MRI.

To get a sense of where you fall on the Sensitivity to Context spectrum, answer True or False to these questions: