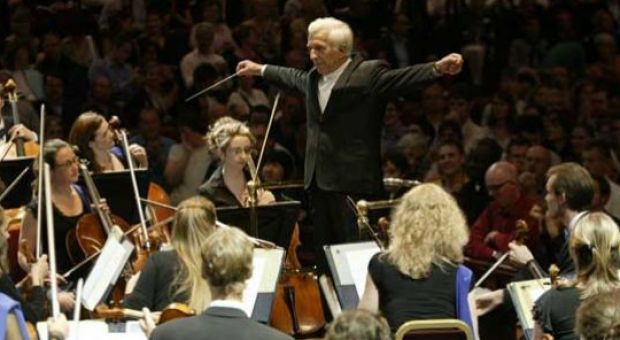 Vladimir Ashkenazy is a classical music star who was born in the Stalinist era in the Soviet Union. He moved to London in the 1960s. Ashkenazy is a renowned chamber music performer and six-time Grammy award-winning pianist. He is also a veteran conductor and is touring the U.S. in April with the European Union Youth Orchestra. Vladimir Ashkenazy talks about his life, his career and his passion for classical music.

Vladimir Ashkenazy was born in Russia, settled in London, became a citizen of Iceland, lives in Switzerland and is now principal conductor of the Sydney Symphony Orchestra. For more than a decade, the Grammy award-winning pianist also has directed the European Union Youth Orchestra. The group is now on tour in the United States.

Because Asnkenazy’s talent as a pianist was discovered at a young age, he was able to study in the Central Music School of Moscow and then the conservatory, so he experienced some insulation from what the system in Russia was like at the time. “Everything was supported by the government so I had a very good musical education,” he said. But he remembers the day Stalin died. Everything was absolutely silent in Moscow, he said. He asked his piano teacher, an Armenian, what would happen now that Stalin was dead. She whispered in his ear that everything would be better now.

Some Things “Impossible” To Play

Ashkenazy said it’s hard to answer whether it was “easy” for him to learn piano, but because his hands aren’t very large, he does find that some things are almost “impossible” for him to play. “For instance, Franz Liszt, the great pianist, had huge hands. For instance, Van Cliburn has big hands too and Richter, a great Russian pianist. Mine are small so some things I couldn’t play,” he said. Ashkenazy thought Tchaikovsky, in particular, would be very hard for him. But he did play Tchaikovsky’s first piano concerto with great success. “I managed, but it was very difficult,” he said.

Buying Music In The West

When Ashkenazy finally got to travel to the west, he bought many music albums he couldn’t get at home, in Communist Russia. “I love music very much. In the Soviet Union, there weren’t so many recordings of all the greatest world music and not so many scores to be bought. So when I came to the West, when I started traveling to the West, first to Belgium, then to West Germany, then to America, I brought suitcases full of LPs of course and scores, too. So I became an object of envy from many musicians in Moscow and they borrowed things from me,” he said.

Ashkenazy still considers himself a Russian citizen, although he came to settle in London and lives in Switzerland. “I’m born there. I got my musical education there. My mother was very Russian. My father was Jewish, my mother Russian. She christened me in the Russian Orthodox Church so I’m a Christian. And my country will always stay in me absolutely to the moment I die. But I benefited so much from being in the West, you can’t imagine. No words will suffice to tell you how much,” he said.