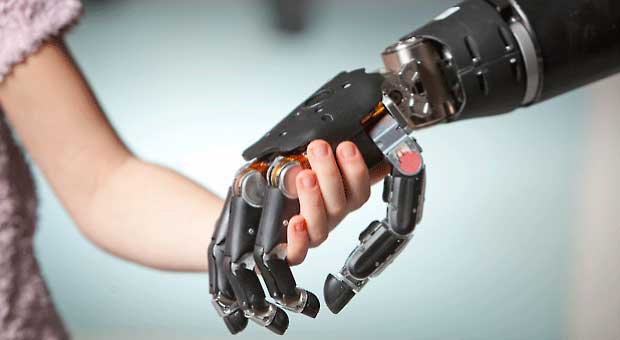 The Modular Prosthetic Limb (MPL), developed by the Johns Hopkins University Applied Physics Laboratory with funding from the Defense Advanced Research Projects Agency provides 26 degrees of motion, including independent movement of each finger, in a package that weighs about nine pounds and has the dexterity of a natural limb. ©JHU/APL with funding from DARPA’s Revolutionizing Prosthetics program

An estimated 2 million Americans have had an arm or leg amputated from injury or illness. Many chose to wear prosthetic limbs. Ten years ago, most artificial arms and legs were clunky and fragile. But prosthetic technology has advanced significantly since then. A vast body of research gained from treating American soldiers wounded in Iraq and Afghanistan has led to robotic knees and ankles that adjust to terrain and activity. Leg amputees now run marathons, climb mountains and even skydive. And a new bionic arm powered by the thoughts of the person wearing it can mimic almost all the movements of a real hand.

The Modular Prosthetic Limb (MPL), developed by the Johns Hopkins University Applied Physics Laboratory with funding from the Defense Advanced Research Projects Agency provides 26 degrees of motion, including independent movement of each finger, in a package that weighs about nine pounds and has the dexterity of a natural limb. In 2012, a patient at the University of Pittsburgh Medical Center successfully demonstrated that the arm could be controlled by the user’s thoughts. Several patients, including a decorated Afghanistan war hero, are helping researchers further develop the prosthesis. In 2013, the MPL will continue to be tested and refined in a clinical trial at the California Institute of Technology.

On Jan. 24, Air Force Tech Sgt. Joe Delauriers became the first patient at Walter Reed National Military Medical Center to begin using the Modular Prosthetic Limb. With nearly as much dexterity as a natural limb, 22 degrees of motion, and independent movement of fingers, the MPL was developed as part of a four-year program by Johns Hopkins University.