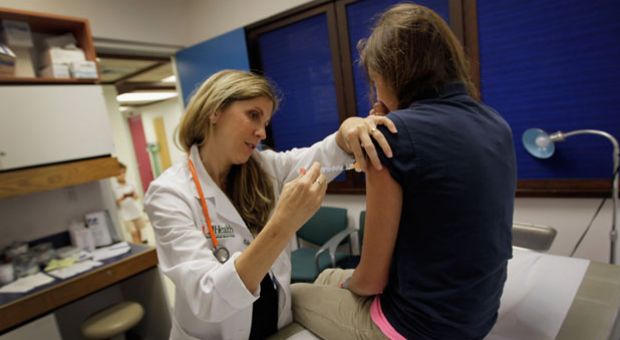 University of Miami pediatrician Judith L. Schaechter, M.D. gives an HPV vaccination to a 13-year-old girl in her office at the Miller School of Medicine on September 21, 2011 in Miami, Fla. (Photo by Joe Raedle/Getty Images)

Not enough children in the United States are being vaccinated against the cancer-causing human papillomavirus, or HPV, according to a new report by the President’s Cancer Panel. Only about a third of girls and less than 7 percent of boys have received the shots. Some doctors don’t promote the HPV vaccine like they do other vaccines. And some parents resist getting their children vaccinated. But health experts say if the HPV vaccination rates were as high as other vaccine rates, an estimated 99,000 future cancer cases could be prevented.