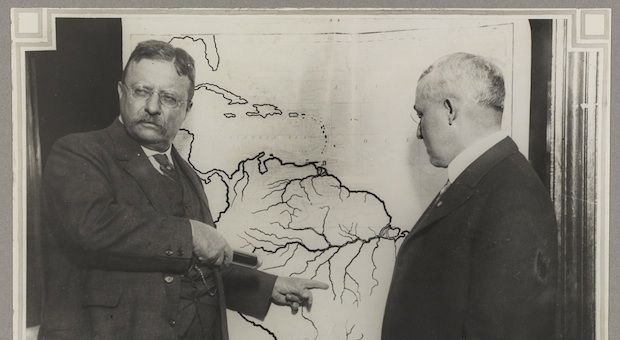 President Roosevelt points at a map of South America to highlight the area explored during the Roosevelt-Rondon Scientific Expedition in Brazil. Image circa 1913-1919. Library of Congress Prints and Photographs Division, Washington, D.C.

After Theodore Roosevelt lost his bid for a third term as president in 1912, he was bitterly criticized by former supporters. He split the Republican Party vote and was blamed for getting Democrat Woodrow Wilson elected. Roosevelt was desperate for a change of scenery. He jumped at an invitation to join an expedition to chart the ‘River of Doubt,’ deep in the Amazon rain forest. On the 100th anniversary of the journey, a new novel re-imagines the ill-fated trek Teddy and his son took in 1914 that almost left them dead. They are kidnapped by an Amazonian tribe that makes them hunt a ferocious beast, an event that haunts Roosevelt’s son forever.