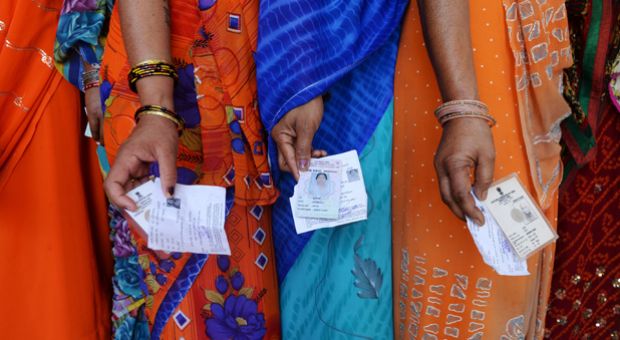 Indian voters pose with their voting slips as they stand in a line to cast their vote outside a polling station at Dabua village on the outskirts of Faridabad on April 10, 2014, during the third stage of voting for national elections in the northern state of Haryana. India's upstart anti-graft party faced a key test as the national capital voted in the first major phase of the country's marathon general elections. The third phase of voting began at 7 a.m. in 91 constituencies, representing nearly a fifth of the 543-seat lower house, across the capital and 13 other states, including Maoist insurgency-hit eastern India. SAJJAD HUSSAIN/AFP/Getty Images

NATO yesterday released satellite photos showing Russian forces poised near the border with Ukraine. That comes as Ukraine’s acting president says pro-Russian protesters who disarm and leave occupied buildings in the country’s eastern region will not be prosecuted. The world’s biggest democratic parliamentary election gets underway in India. Afghans turn out in strong numbers for their presidential and provincial council elections – including a large percentage of women. And Rwandans mark the twentieth anniversary of genocide. A panel of journalists joins Diane for analysis of the week’s top international news stories.