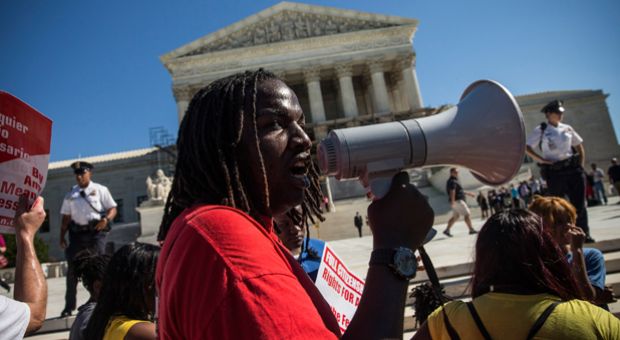 Tabrian Joe, a Sophomore at Western Michigan University, leads a protest in support of affirmative action, outside the Supreme Court during the hearing of 'Schuette v. Coalition to Defend Affirmative Action' on October 15, 2013 in Washington, DC. The case revolves around affirmative action and whether or not states have the right to ban schools from using race as a consideration in school admissions. The Supreme Court upheld Michigan's ban on affirmative action on April 22, 2014. Andrew Burton/Getty Images

A decade ago, the Supreme Court ruled that colleges and universities could take race into account as one of several variables in the admissions process. But in 2006, the state of Michigan passed a constitutional amendment banning affirmative action at its public universities. And yesterday, the Supreme Court upheld the Michigan law. Supporters of the decision say it affirms the right of voters to decide what’s best for admissions policies at their state colleges. But opponents argue it leads to a lack of diversity in higher education. We discuss the Supreme Court’s decision and the future of affirmative action at public colleges and universities