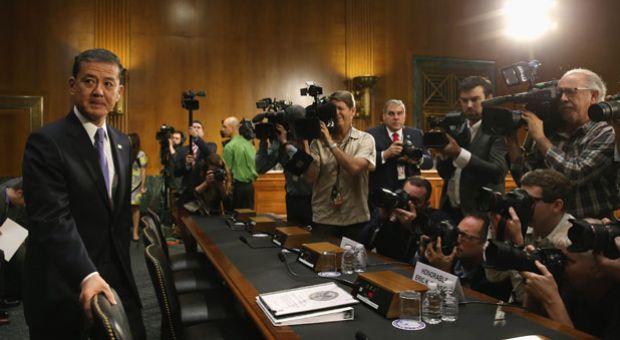 U.S. Veterans Affairs Secretary Eric Shinseki arrives at a Senate Veterans' Affairs Committee hearing that is focusing on wait times veterans face to get medical care May 15, 2014 in Washington, DC. The American Legion called Monday for the resignation of Shinseki amid reports by former and current VA employees that up to 40 patients may have died because of delayed treatment at an agency hospital in Phoenix, Arizona. Mark Wilson/Getty Images

As the 60th anniversary of Brown v. Board of Education approaches, some say the same precedents that helped dismantle separate but equal could also pave the way for gay marriage.

Juan Williams, a political analyst at Fox News and a columnist at The Hill newspaper, said the 14th Amendment was written to give equal rights to citizens of all races, but also guarantees equal treatment of Americans in any kind of subgroup–in this case, those who want to marry a partner of the same sex.

Christina Bellantoni, the editor in chief of Roll Call, said a high-ranking Republican official recently told her the issue would likely be dead in two years, predicting that, like most recently in Idaho and Arkansas, all state courts will just “let [the issue] go.”

For the full discussion, watch the video below.