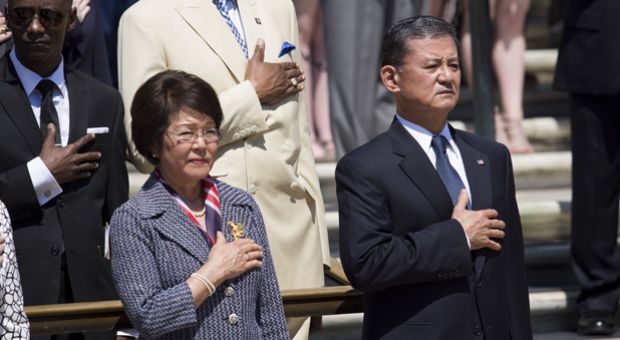 Veterans Affairs Secretary Eric Shinseki (R) and his wife Patricia Shinseki (L) look on during as U.S. President Barack Obama attends a wreath laying ceremony at the Tomb of the Unknown Soldier at Arlington National Cemetery, May 26, 2014 in Arlington, Virginia. Drew Angerer/Getty Images

The Friday News Roundup: An independent report widens the scope of alleged misconduct at VA hospitals. A shooting in California renews debate over gun control. And new data show the US economy shrank last quarter. Diane and a panel of journalists discuss this week’s top domestic headlines.

Is Shinseki’s Resignation A Distraction From Larger VA Issues?

Media attention in the wake of the scandal around wait times at Veterans Administration hospitals has focused largely on VA Secretary Eric Shinseki’s resignation.

But as speculation grew Friday morning around whether the retired U.S. Army general would remain in his position, some said it was a distraction from solving the department’s history of serious issues.

The problems at the VA “go well beyond what’s happening in Phoenix,” and for that matter, with Shinseki, Reuters reporter Jeff Mason said Friday on the Diane Rehm show.

For instance, said Ruth Marcus, a columnist at The Washington Post, the VA has issued 18 reports on veterans’ wait times since 2005–an issue that predates both Shinseki and President Barack Obama.

And it’s not clear how quickly lawmakers will focus on those kinds of issues even now that Shinseki has announced he will step down.

Watch the full discussion below

Watch the full video of our Domestic News Hour.