The Crisis in Iraq And Its Security Threat To The U.S.

The Crisis in Iraq And Its Security Threat To The U.S. 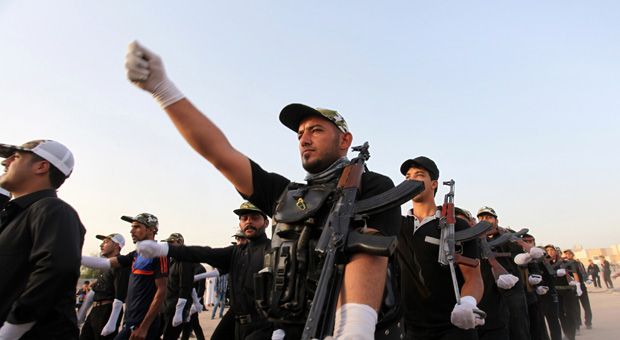 Newly-recruited Iraqi volunteers take part in a training session on June 20 2014, in the southern Shiite Muslim shrine city of Najaf as thousands of Shiite volunteers join Iraqi security forces in the fight against Jihadist militants who have taken over several northern Iraqi cities. HAIDAR HAMDANI/AFP/Getty Images

Secretary of State John Kerry arrives in Baghdad today amid the threat of a widening sectarian war. Over the weekend, Sunni insurgents captured a key border post with Syria. As Nouri Al-Malaki’s Shiite-led government continues to lose ground to the Islamic State in Iraq and Syria, Kerry is expected to urge the prime minister to form a more inclusive government. President Barack Obama has ruled out U.S. military intervention in Iraq for now, saying he will send up to 300 advisers to better assess the situation on the ground. But some say Americans can’t turn the tide in Iraq without major political changes there. Guest host Susan Page and a panel of experts discuss the latest on the crisis in Iraq and the security threat it poses to the region and to the U. S.