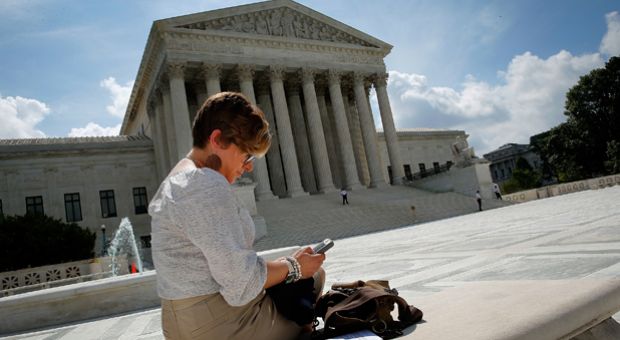 Kirsten Luna from Holland, Michigan, uses her smartphone outside the U.S. Supreme Court after a major ruling on cell phone privacy by the court June 25, 2014 in Washington, D.C. The Supreme Court issued a ruling requiring law enforcement officials to have a search warrant to search the cellphones of suspects they arrest. Win McNamee/Getty Images

The Supreme Court hands down key rulings. House Speaker John Boehner says he will file suit against President Barack Obama accusing him of abuse of executive power. And what we learned from Tuesday’s primaries. Our panel discusses the week’s top headlines.

What Could This Week’s Supreme Court Decisions Mean For NSA Surveillance?

The Supreme Court this week ruled police need a warrant to search your cell phone — one of several decisions that leaned toward limiting what the government can do, said John Prideaux, the Washington Correspondent for The Economist.

“It’s sort of siding with a slightly more libertarian view of citizens’ rights,” Prideaux said of the court’s rulings.

It’s a kind of philosophy with which justices would look negatively upon the communication surveillance carried out by the NSA, he told guest host Susan Page on June 27 during the Diane Rehm Show’s domestic news hour.

Watch the discussion below.

Watch the full video of the week’s news in studio.