Update On U.S. Involvement in Iraq and Syria

Update On U.S. Involvement in Iraq and Syria 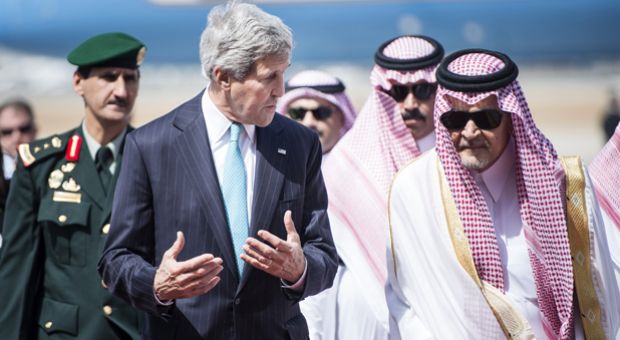 US Secretary of State John Kerry (L) and Saudi Foreign Minister Prince Saud al-Faisal (R) walk together upon Kerry's arrival on June 27, 2014 at King Abdulaziz International Airport in the Saudi city of Jeddah. Kerry arrived in Saudi Arabia to meet the Syrian opposition, a day after hosting urgent talks on Syria and Iraq in Paris, as Washington unveiled plans to provide some $500 million in arms and training to the Syrian rebels. BRENDAN SMIALOWSKI/AFP/Getty Image

An Al-Qaeda breakaway group repelling government forces in Tikrit declared the creation of a new caliphate spanning large areas of Iraq and Syria. The Islamic state of Iraq and the Levant announced it will now be known as The Islamic State. Meanwhile, Russia sent warplanes to support the Iraqi government’s fight against Sunni extremists. While Prime Minister Nouri Al-Maliki says Washington has been slow to provide air power, the U.S. began flying armed predator drones over Baghdad. It is an operation the Pentagon says offers added protection to American military advisers. Diane and her guests discuss the latest developments in Iraq and the potential for increased American involvement there.