Ongoing Efforts To Vaccinate Children Against Polio, Measles and Other Deadly Diseases

Ongoing Efforts To Vaccinate Children Against Polio, Measles and Other Deadly Diseases 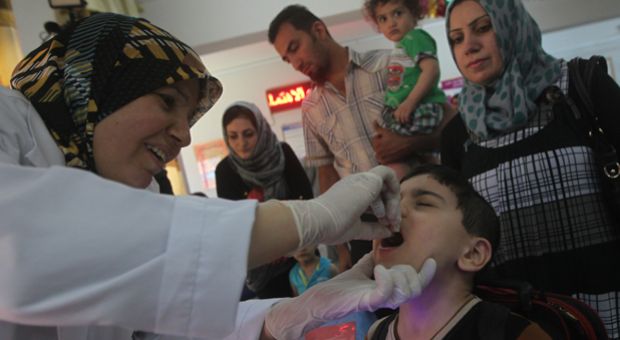 An Iraqi doctor gives a polio vaccine to a child at a health clinic in Baghdad. Iraq aims to vaccinate millions of children across the country against the highly contagious polio virus in response to an outbreak of the disease in the country as well as the region. AHMAD AL-RUBAYE/AFP/Getty Images

In 1966, scientists developed a vaccine for measles. By the year 2000, the disease was considered eradicated in the U.S., a major public health victory. Fast forward to today and cases of measles have reached a 20-year high. The reason, doctors say, is because people are choosing not to be vaccinated or have their children vaccinated. It’s a troubling trend for public health officials in the developed world. The story is quite different in poor countries where 22 million children have little access to basic vaccines. Diane and her panel of experts discuss efforts to eradicate polio, measles and other deadly diseases and why some U.S. parents are resisting.