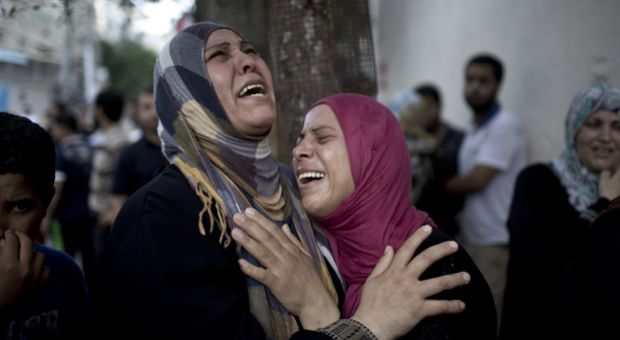 Palestinian women grieve over the death of relatives outside the morgue of the Kamal Adwan hospital in Beit Lahiya, on July 24, 2014, after a UN school in the northern Beit Hanun district of the Gaza Strip was hit by an Israeli shell. MAHMUD HAMS/AFP/Getty Images

A panel of journalists joins Diane for analysis of the week’s top international news stories: A blast kills at least sixteen at a UN school used as a civilian shelter in Gaza. The source of the bombing is unclear and Israelis and Palestinians blame each other. Secretary Kerry proposes a weeklong truce. Pro-Russian separatists hamper the international investigation on the downed Malaysian plane in eastern Ukraine. Pro-Russian rebels shoot down two Ukrainian military jets. President Obama meets with Central American presidents on the child migrant crisis. And the Islamist terrorist group Boko Haram is suspected in bombings in Nigeria that kill at least seventy-five people.