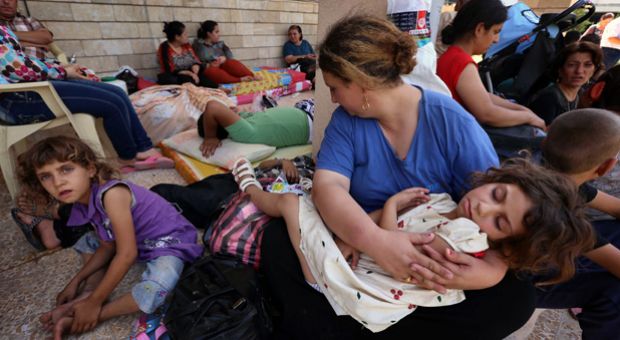 Iraqi Christians who fled the violence in the village of Qaraqush, about 30 kilometers east of the northern province of Nineveh, rest upon their arrival at the Saint-Joseph church in the Kurdish city of Arbil, in Iraq's autonomous Kurdistan region, on August 7, 2014. Gunmen from the Sunni Muslim Islamic State (IS) seized Qaraqush, Iraq's largest Christian town, and several others near Mosul following the withdrawal of Kurdish peshmerga fighters, inhabitants said. SAFIN HAMED/AFP/Getty Images

A panel of journalists joins Diane for analysis of the week’s top international news stories: The U.S. begins airstrikes in northern Iraq against Islamic militants. U.S. food aid is dropped to refugees after Sunni radicals capture a strategic dam in Mosul. Israel and Hamas resume attacks after a three-day cease fire in Gaza. Presidential rivals in Afghanistan sign a unity government agreement. The World Health Organization declares a global emergency as Ebola continues to spread in West Africa.