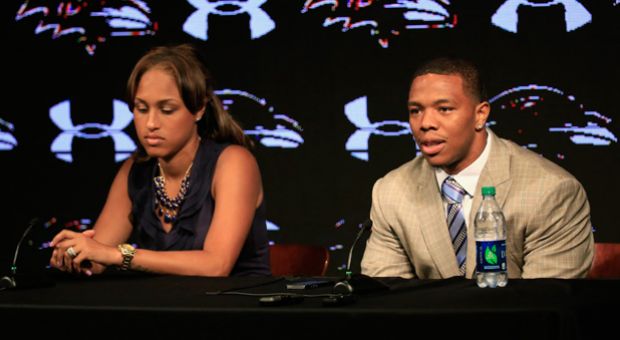 Running back Ray Rice of the Baltimore Ravens addresses a news conference with his wife Janay at the Ravens training center on May 23, 2014 in Owings Mills, Maryland. Rob Carr/Getty Images

President Obama outlines a strategy to combat the threat of ISIS, including air strikes and arming Syrian rebels. Congress debates the President’s Middle East strategy while leaders vow to pass a spending bill that would avoid another government shutdown. The N-F-L comes under fire once again for its handling of the Ray Rice domestic violence case. The White House says the President will delay taking action on immigration until after the midterm elections. In Ferguson, Missouri, the city council proposes broad changes to the court system in the wake of the Michael Brown shooting. And results from the latest and final round of primaries. A panel of journalists join Susan Page to discuss the week’s top national news.

Featured Clip: After Ray Rice’s Suspension, What’s Next For The NFL?

What exactly NFL Commissioner Ray Goodell knew about the domestic abuse incident between Baltimore Ravens player Ray Rice and his then-fiancee, and when he knew it, could impact not only league rules, but also how the organization is funded and who serves as its leader.

Could Condoleezza Rice take Goddell’s place? Could Congress cut off the NFL’s non-profit status? Watch our panel discuss the issues below.

Watch our panel in studio as they round up the week’s top news.